(Senator Brian Schatz (D-HI): “Republicans are trying to take away your health care”)

The Trump administration is fighting in federal court to take away protections for people with pre-existing conditions,” said Brian Schatz (D-HI). “If this Supreme Court nominee[, Brett Kavanaugh,] gets through the process, it will be harder than ever for Americans to access health care. It will be harder for women to access reproductive care. It will be harder for patients to keep the protections that they deserve and need. That’s why this fight is so important. There is too much at stake to do nothing. So please raise your voice and join us in the fight for health care.” 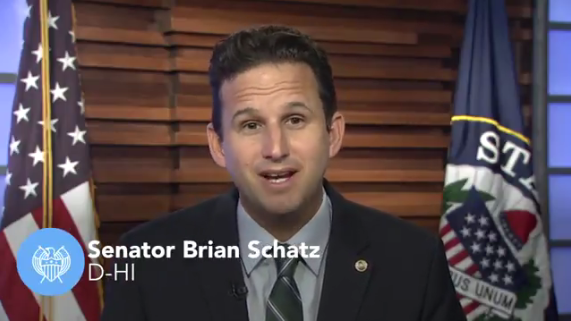 A transcript will be posted if one becomes available.

Congress is in recess so there was no weekly news conference by Democratic Leader Nancy Pelosi.

San Francisco – Democratic Leader Nancy Pelosi issued this statement after the Department of Labor reported that workers’ wages increased only 0.3 percent over the past month, and the economy created 157,000 jobs, below job growth in May and June:

“July’s jobs report shows that the wealthiest 1 percent and big corporations continue to hoard the benefits of the GOP Tax Scam for the rich, while American workers are denied the bigger paychecks they deserve.

“Hard-working Americans continue to be stuck paying the price for the Republicans’ special interest agenda. Families are drowning under the weight of stagnant wages, higher health costs from the GOP sabotage and skyrocketing prescription drug prices from the same Big Pharma companies that were just handed massive tax breaks. Now, even after exploding the deficit with their completely unpaid-for $2 trillion tax breaks of the GOP Tax Scam for the rich, Republicans are now trying to bend or break the law to hand another $100 billion tax break to the wealthiest 1 percent, all at the expense of working and middle class families.

“The American people deserve so much better than the raw deal they are getting from the cynical Republican special interest agenda. Democrats are fighting to deliver A Better Deal For The People, with a plan to lower health costs and prescription drug prices, increase Americans’ pay through strong economic growth by rebuilding America and clean up corruption to make Washington work for the people.”

On July 26th, Senate Democrats held a news conference on the one year anniversary of the failure of the Republican Congress to repeal the Affordable Care Act.

Senate Finance Committee Ranking Member Ron Wyden (D-OR), Senate Finance Committee Member Debbie Stabenow (D-MI), and Senate HELP Committee Member Chris Murphy (D-CT) accompanied by Leslie Dach of Protect Our Care, Catherine Buxton, a Planned Parenthood patient, and Samantha and Josephine McGovern of the Little Lobbyists will hold a press conference ahead of the one year anniversary of the failure of the Senate Republican Trumpcare repeal bill to highlight the GOP’s politically-motivated efforts to sabotage the American health care system ever since. Thanks to the American people speaking out, Senate Republicans were unable to pass their radical Trumpcare bill, which would have removed important consumer protections for people with pre-existing conditions, left tens of millions uninsured, and raised health care costs on millions more. Senate Democrats will explain that after that defeat, Congressional Republicans and the Trump administration have continued their all-out assault on our current health care system, committing a series of acts aimed at weakening and threatening the American health care system, resulting in higher premiums and putting vital protections and health care rights on the judicial chopping bloc

3 comments for “Fighting Back: “Republicans are trying to take away your health care””