The Weekly Democratic Party Address was delivered by Representative Bobby Scott of Virginia.

(Congressman Bobby Scott of Virginia delivered the Weekly Democratic Address. In this week’s address, Scott highlights Democrats’ Aim Higher Act, which gives every student the opportunity to earn a quality, debt-free degree or credential that leads to a rewarding career.)

“In 1965, when President Johnson signed the Higher Education Act, he said that it meant – and I quote – ‘that a high school senior anywhere in this great land of ours can apply to any college or any university in any of the 50 States and not be turned away because [their] family is poor.’

“But fifty-three years later, the promise of an affordable education is out of reach for millions of students. And in May of this year, America’s outstanding student loan debt surpassed $1.5 trillion. We can and must do better for America’s students.

“Last month, I was joined by House Democratic leadership in offering a solution. It’s called the Aim Higher Act. 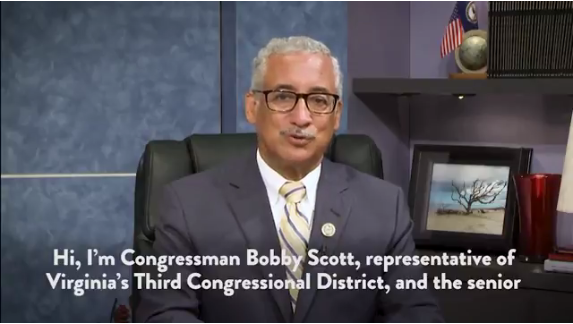 “Hi, I’m Congressman Bobby Scott, representative of Virginia’s Third Congressional District, and the Senior Democrat on the House Committee on Education and the Workforce. Today, I want to talk to you about Democrats’ vision for the future of higher education.

“In 1965, when President Johnson signed the Higher Education Act, he said that it meant – and I quote – ‘that a high school senior anywhere in this great land of ours can apply to any college or any university in any of the 50 States and not be turned away because [their] family is poor.’

“But fifty-three years later, the promise of an affordable education is out of reach for millions of students. And in May of this year, America’s outstanding student loan debt surpassed $1.5 trillion. We can and must do better for America’s students.

“Last month, I was joined by House Democratic leadership in offering a solution. It’s called the Aim Higher Act.

“Under the Aim Higher Act, every student will have the opportunity to earn a quality, debt-free degree or credential that leads to a rewarding career.

“Here’s how it works: First, we provide two years of tuition-free community college to every student through a federal-state partnership. We also address the rising cost of public four-year schools by pushing states to reinvest in their public colleges and universities. This will help reverse the persistent trend of states cutting higher education funding and shifting the costs to students and families.

“Second, we make student financial aid more generous to keep pace with the rising cost of college, and we allow students to use Pell Grants for quality, short-term programs that provide an accelerated path to the workforce.

“And third, for students who do take on debt, we make student loans easier to understand and cheaper to repay. The Aim Higher Act eliminates the confusing web of repayment programs and establishes two, straightforward plans with generous plans that help students get out of debt sooner.

“In response to the nationwide teacher shortage, we also preserve the popular Public Service Loan Forgiveness program to encourage talented individuals to pursue careers in the classroom.

“The Aim Higher Act isn’t just focused on cutting the cost of higher education, it’s focused on improving the quality of higher education. Our proposal cracks down on predatory institutions that waste student and taxpayer money by peddling expensive, low-quality programs. Our veterans – who have earned their GI benefits through sacrifice and service – are frequently victims of fraudulent schools.

“Under the Aim Higher Act, all schools will be measured by their students’ success in both completing their college education and entering the workforce.

“And finally, the Aim Higher Act gives students the tools they need to graduate on time. We invest in campus child care for student parents, subsidized housing for homeless and foster youth, faculty training for students with disabilities, and community centers to help student veterans transition to civilian life.

“Our plan for higher education – in which we invest in students, focus on quality, and crackdown on predatory schools – is dramatically different from the proposal advanced by our Republican colleagues.

“Policy is defined by priorities. Instead of spending limited resources on a tax cut for those who don’t need it, Democrats believe that we should invest in our children and in the future of our economy. That’s what the Aim Higher Act does.

“My district is home to exceptional public colleges, public universities, community colleges and apprenticeship programs. And education and training available at these institutions should be available to all students. I hope you will join us in pushing for a higher education system that puts the promise of a quality debt-free degree and rewarding career within the reach of all Americans.

“Again and again, hard-working families have been given a raw deal by the Republicans in Washington – driving an agenda that hurts students, workers, seniors, people with pre-existing conditions, just about everyone outside of big corporations and the wealthiest 1 percent.

“Democrats are fighting to advance an agenda that’s For The People: Lowering your health care costs and prescription drug prices, increasing your pay through strong economic growth by rebuilding America, and cleaning up corruption to make Washington work for you.

“Together, we will deliver A Better Deal: Better Jobs, Better Wages and a Better Future for every American, everywhere.”

Congress is not in session and there was no weekly press conferences by House leadership.

From Nancy Pelosi’s newsroom, a letter to her colleagues about owning the August recess:
Dear Colleague on A Call to Action: A Better Deal For Our Democracy

A key part of our For The People agenda is to CLEAN UP CORRUPTION to make Washington work for the American people. The most recent revelations of corruption among the Trump Administration, his friends and the GOP Congress are a call to action that present an opportunity for change to happen now.

In the election of 2006, Democrats pointed out the Republicans’ pattern of corruption, cronyism and incompetence, under the frame “Drain the Swamp.” In the Majority, we acted on that promise by passing a strong ethics package. Donald Trump hijacked the name and totally betrayed the mission.

The brazen corruption, cronyism and incompetence of the Trump Administration is reflected in the conduct of House Republicans. Congressman Collins was the first Member of the House to endorse President Trump and is one of his closest allies. Now, the indictment of Congressman Collins shows that Republicans have turned the already swampy GOP Congress into a cesspool of self-enrichment, secret money and special interests. Congressman Collins revealed Republicans’ true corrupt purpose behind their GOP Tax Scam for the rich, when he admitted, “My donors are basically saying, ‘Get it done or don’t ever call me again.’”

This connection between money in politics and exploitation in policy is clear to the American people. House Republicans are wallowing in the swamp that they have enabled and deepened at the expense of working families everywhere.

To honor the pledge of our For The People agenda, a Democratic Majority will swiftly act to pass tougher ethics and campaign finance laws and crack down on the conduct that has poisoned the GOP Congress and the Trump Administration. We are grateful to Congressman John Sarbanes and the Democracy Reform Task Force for their leadership on A Better Deal For Our Democracy. We urge members to highlight it in events in August, as was suggested by our DPCC co-chairs on yesterday’s conference call.

In district events and on social media, we must drive home the clear contrast between the corruption of the GOP Congress and the Better Deal that Democrats are offering the American people. We must OWN AUGUST with our pledge to deliver action.

Democrats are For The People:

– Lower your health care costs and prescription drug prices;
– Increase your pay through strong economic growth by rebuilding America;
– Clean up corruption to make Washington work for you.

We will OWN AUGUST with strength, confidence and clarity, as we make our case to the American people.

Thank you for your leadership.

4 comments for “Fighting Back: “Democrats believe that America should invest in our children””