(Congressman Elijah Cummings of Maryland, Ranking Member of the Committee on Oversight and Government Reform, delivered the Weekly Democratic Address. In this week’s address, Cummings highlights the immediate need for Congress to enact oversight as a check to the rampant culture of corruption in the Trump Administration, and ensure that Washington works For the People.)

This has been a shocking and disgraceful week for our nation – one that will tarnish our history books for generations.

[Republicans] are not acting as an effective check on the Executive Branch. To the contrary, they are aiding and abetting the Administration by turning a blind eye to its rampant corruption.

They have been actively interfering, pushing conspiracy theories, attacking our law enforcement agencies, and walling off the White House from Congressional scrutiny. 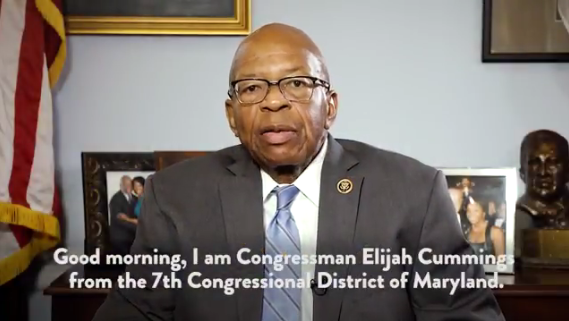 “Good morning, I am Congressman Elijah Cummings from the 7th District of Maryland. I serve as the senior Democrat on the Committee on Oversight and Government Reform.

“This has been a shocking and disgraceful week for our nation – one that will tarnish our history books for generations.

“That same day, President Trump’s campaign chairman, Paul Manafort, was convicted by a jury of his peers of eight separate counts of fraud. He now faces the rest of his life in prison.

“These events follow five previous convictions and guilty pleas from other top officials.

“The Oversight Committee is supposed to be the primary investigative committee of Congress. We should be acting in a bipartisan way to conduct rigorous and credible oversight of the Executive Branch.

“During the campaign, President Trump promised to ‘drain the swamp’ in Washington, D.C. But with Republicans in control, it has been just the opposite.

“They are not acting as an effective check on the Executive Branch. To the contrary, they are aiding and abetting the Administration by turning a blind eye to its rampant corruption.

“They have been actively interfering, pushing conspiracy theories, attacking our law enforcement agencies, and walling off the White House from Congressional scrutiny.

“Our Chairman on the Oversight Committee has not issued a single subpoena to anyone in the Trump Administration, on any subject, ever. Not one.

“This week, I sent a letter asking our Chairman to hold a hearing with Michael Cohen, who implicated the President in these crimes. Mr. Cohen indicated that he is now willing to testify before Congress and he would not seek immunity.

“This hearing should be a no brainer for our Committee. For the Oversight Committee not to hold this hearing would be legislative malpractice.

“The Constitution creates checks and balances for a reason. It gives Congress the responsibility of conducting oversight of the Executive Branch because our Founding Fathers believed this would create a government with integrity, a government that is effective and efficient, and a government less prone to the abuses they were escaping.

“If these checks and balances are not working, then all of the freedoms and the liberties we enjoy as Americans are threatened. The integrity of our democracy is imperiled.

“President Trump’s entire administration seems to be based on the presumption that he and his aides are above the law.

“The problem is that, right now, this Republican Congress is allowing this presumption to become a reality, especially at least in terms of Congressional oversight.

“On the Democratic side, we believe the American people deserve a government of, by, and for the people. In fact, that is why we call our agenda – For The People. We are working to pass tougher ethics and campaign finance laws and crack down on ethical blindness that have poisoned this Administration and this Congress. We are fighting to clean up corruption to make sure Washington works for everyone.

“But for this to work, Congress must put aside politics and rise to meet the responsibility entrusted to us by the Constitution.

The House is in recess so there was no weekly news conference on Thursday.

San Francisco – Democratic Leader Nancy Pelosi released the following statement after the indictment of Congressman Duncan Hunter on charges related to the falsification of campaign finance records and the misuse of campaign funds:

“The charges against Congressman Hunter are further evidence of the rampant culture of corruption among Republicans in Washington today. Once again, one of President Trump’s earliest supporters in Congress has broken the public trust and abused his position to enrich himself and his family. Speaker Ryan must immediately call on Congressman Hunter to resign, and affirm that no one is above the law.

“The American people deserve better than the GOP’s corruption, cronyism, and incompetence. Democrats’ For The People agenda means enacting tougher ethics laws to crack down on the GOP Congress and Administration’s self-dealing and ethical blindness.

“While House Republicans enrich themselves and their special interest donors, Democrats are committed to cleaning up corruption to make Washington work for everyone.”

“Today’s guilty verdicts against President Trump’s campaign Chairman, Paul Manafort, and the guilty plea of Trump’s personal lawyer, Michael Cohen, are further evidence of the rampant corruption and criminality at the heart of Trump’s inner circle. Cohen’s admission of paying hundreds of thousands of dollars in hush money ‘at the direction of the candidate’ to influence the 2016 election shows the President’s claims of ignorance to be far from accurate, and places him in even greater legal jeopardy.

“These convictions are further proof that the Special Counsel’s team and prosecutors in New York are conducting thorough and professional investigations, which must be permitted to continue free from interference. Congressional Republicans’ determination to cover up for the President and his criminal cronies betrays their oath of office and undermines their duty to the American people. House Republicans must abandon their complicity with President Trump and affirm that no one is above the law.

“The Trump Administration and Congressional Republicans’ unprecedented culture of corruption, cronyism and incompetence is characteristic of the dysfunctional political system in Washington. Democrats are committed to fighting For The People to restore dignity to our democracy and give power back to the people.”