The Weekly Democratic Party Address was delivered by Senator Doug Jones of Alabama.

I’ve made it a priority to work with my colleagues on both sides of the aisle to expand access to quality, affordable health care to every family in Alabama and across the country. And while we’ve made great strides, like funding the Children’s Health Insurance Program for another 10 years, we’ve seen this President, his administration, and Republicans in Congress take steps to undermine our health insurance markets and put Americans at risk. […]

No law, including the Affordable Care Act, is perfect from the start. But instead of sabotage, we need solutions. With your help, we can keep this important issue at the top of the agenda. Together, our voices can drive the national conversation around health care and get us back on track to ensure quality, affordable care for all Americans. 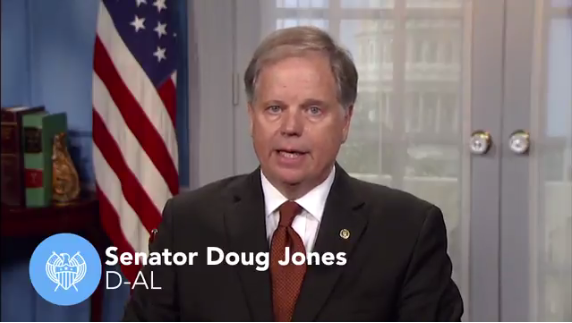 A transcript will be provided if one becomes available.

Congress is in recess until after the election and there will be no weekly news conference from House Democratic leadership until they return – we hope ready to do a victory dance!

From Nancy Pelosi’s newsroom this past week:

“President Trump’s USA Today Op-Ed is the latest pronouncement of dishonesty from Republicans desperate to hide the truth about the past two years of GOP attacks on Medicare, on protections for pre-existing conditions, and on affordable health care.

“The facts are these:

– President Trump’s Justice Department is in federal court backing a Republican lawsuit to strike down protections for 130 million Americans with pre-existing conditions.
– Every year of his presidency, House Republicans’ budget proposals have called for approximately $500 billion in cuts to Medicare and at least $1 trillion cut from Medicaid, which seniors rely on for long-term care.
– And while the Affordable Care Act endures because of the outcry of the American people, Republicans have done everything they can to sabotage Americans’ health coverage, driving up premiums across America, and have refused to take action to address the rising cost of prescription drugs.

“Because they know they cannot defend their abysmal record on the health care and other kitchen table issues that matter most to hard-working Americans, Republicans want to distract and divide with false attacks on Democrats’ positions. On immigration, Democrats are for securing our borders, protecting Dreamers, opposing the Trump Administration’s family separation policy and passing bipartisan, comprehensive immigration reform. As President Reagan said in his last speech as President, ‘Thanks to each wave of new arrivals to this land of opportunity, we’re a nation forever young, forever bursting with energy and new ideas, and always on the cutting edge, always leading the world to the next frontier. This quality is vital to our future as a nation. If we ever closed the door to new Americans, our leadership in the world would soon be lost.’

“Republicans are for the special interests. Democrats are For The People: lower health care costs and prescription drug prices, increase pay through strong economic growth by rebuilding America, and clean up corruption to make Washington work for the American people.

“In order to achieve health care for all Americans, Democrats will build on the foundation of the Affordable Care Act for quality, affordable and accessible health care, and fight efforts to cut Medicare and Medicaid. And we will continue to fight the Republican assault on a healthy America.”

Democrats are gearing up for their new oversight powers in the 116th Congress which convenes on January 3, 2019.

San Francisco – Today, Democratic Leader Nancy Pelosi sent a Freedom of Information Act (FOIA) request to the FBI for the report on Justice Kavanaugh including transcripts of the underlying interviews, instructions sent to the FBI from the White House, and any communications to the FBI from Senate Republicans regarding the scope of the investigation.

Leader Pelosi wrote, “The FBI’s supplemental background investigation appears to have been significantly limited in scope to ensure that a thorough investigation would not take place, numerous witnesses would not be questioned, and numerous questions would not be asked – including whether Justice Kavanaugh deliberately misled Congress on multiple subjects… The public must know what limitations were imposed on the FBI and who imposed them, so this never happens again.”

The full text of the letter can be found at the link.