The Weekly Democratic Party Address was delivered by Congressman-elect Joe Neguse (D-CO). He discusses HR 1, a bold reform package to restore the promise of our democracy – a government of, by and for the people.

“The Democratic Majority will make restoring our democracy a top priority with the passage of HR 1. This bill will begin to clean up the mess in Washington, D.C. by doing three critical things: securing our elections, reducing the power of special interests in political campaigns, and increasing ethical standards for our elected officials.

HR 1 will be the bedrock of everything we do in the next two years, reminding us that when it works, the United States of America has the best form of government ever invented. We can do big things. We can be bold in our ideas and bold in our solutions. We can take bold action to lower health care costs and prescription drug prices, raise paychecks, end gun violence, rebuild our infrastructure and fight climate change.

But we know that first we have to restore trust, faith, transparency, and hope in our government, and remind Americans that this government truly belongs to all of us. The Democratic Majority is going to do just that, and HR 1 is the first step in that process.” 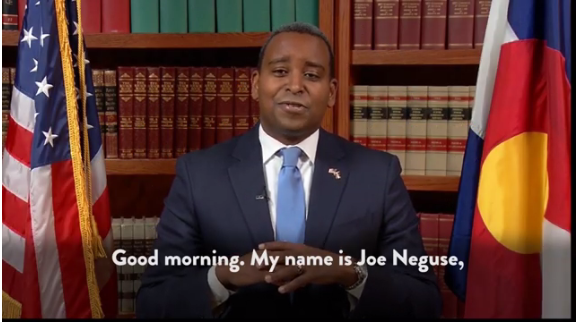 “My name is Joe Neguse, and I’m honored to be the Representative-Elect for Colorado’s 2nd Congressional District.

“The election results this past November give me so much hope that, together, we can restore the future for my newborn daughter’s generation. And when my colleagues and I take the oath and are sworn into the 116th Congress in just a few days, that will be our focus. To stand up for our children’s future, and for the future of working families across our country.

“Unfortunately, as we have seen this past week, we have a long way to go to restoring common sense to Washington, D.C. We watched President Trump drive our nation into a needless and destructive Trump Shutdown, right in the middle of the holidays.

“Literally, as we speak, over 420,000 Federal Employees across the country are going without pay, including firefighters in our national forests, TSA agents who secure us all during our holiday travel, and countless others.

“The partisanship, rancor and dysfunction of the Trump Shutdown is exactly what voters rebuked in November. And that is why on January 3rd, when the New Democratic House Majority arrives, we will bring the hope, vision and goals of effective governance back to the forefront.

“We will not only swiftly pass legislation to reopen government but ensure that the government is responsible, ethical and is truly of, by and for the people.

“It is with that message and directive in mind, that the Democratic Majority will also make restoring our democracy a top priority with the passage of HR 1. This bill will begin to clean up the mess in Washington, D.C. by doing three critical things: securing our elections, reducing the power of special interests in political campaigns, and increasing ethical standards for our elected officials.

“For too long, we have seen insidious efforts to prevent certain types of voters from voting – whether it’s by creating barriers to registration, shutting down polling places, or preventing common sense upgrades to our voting systems, too many Americans are blocked from the ballot-box. That ends with passage of the HR 1.

“We will work not only to automate voter registration but also to expand access to voting through early, absentee, and in-person methods. Here in Colorado, where we’ve taken many of these same steps, we’ve seen people engage in their democracy in record-breaking numbers, including in my district, District 2. It’s long past time we do the same at the national level.

“HR 1 will work to protect the security and sanctity of our voting systems against nefarious attempts from outside sources to influence our elections. And because, voting is one of the most important of our civil rights, we will commit to full reinstatement of the Voting Rights Act, which in recent years had been weakened by hostile and wrong-headed court decisions. Put simply, every voter matters, and every vote must count.

“The second tenet of HR 1 is to make our campaigns clean and deprive Big Money of its ability to drown out the voices of regular citizens. HR 1 will require complete disclosure of political spending by special interest groups, it will clean-up our oversight of elections and amplify the voices of every day Americans, not big business.

“Finally, Democrats will clean up the culture in Washington, DC. Over the past two years, we have all witnessed what happens when public officials and public servants attempt to enrich themselves, when foreign entities and big business can exert influence through loopholes and work-arounds, and when an Administration acts unethically at every turn.

“The result is higher health care costs, hard-working families struggling to keep up, more pollution in our air and our water, and now literally a Trump Shutdown of our own government.

“HR 1 will change that. The bill will strengthen our ethics laws and make sure that when voters send someone to Washington, D.C. they are serving the public and not themselves.

“HR 1 will be the bedrock of everything we do in the next two years, reminding us that when it works, the United States of America has the best form of government ever invented. We can do big things. We can be bold in our ideas and bold in our solutions. We can take bold action to lower health care costs and prescription drug prices, raise paychecks, end gun violence, rebuild our infrastructure and fight climate change.

“But we know that first we have to restore trust, faith, transparency, and hope in our government, and remind Americans that this government truly belongs to all of us. The Democratic Majority is going to do just that, and HR 1 is the first step in that process.

“Happy holidays from my family to yours and I wish you and your families a healthy and happy New Year.”

Speaker-designate Nancy Pelosi did not hold her weekly news conference because Congress is in recess.

She did announce some new hires for the 116th Congress.

Johnson’s service to the U.S. House of Representatives includes her ten years as the chief education and investigative counsel for the Committee on Education and the Workforce, where she advanced justice and fairness in elementary and secondary education, juvenile justice, child nutrition, labor issues and older Americans’ employment and nutrition programs. Previously, she served as staff director and counsel for the Committee on House Administration’s Subcommittee on Libraries and Memorials and then Subcommittee on the Post Office and Civil Service.

“Cheryl Johnson embodies commitment to public service,” said Speaker-designate Nancy Pelosi. “She has dedicated her career to defending and strengthening many of the most important and cherished institutions of our democracy, and we are thrilled that she will be returning to the House of Representatives, where she served with distinction and honor for many years. Johnson’s vast experience, strong leadership and management skills and deep dedication to this body will be vital in ensuring that, as Clerk, the House has the support and tools to carry out our legislative responsibilities to the American people.”

“I am honored to return to this trusted institution,” Ms. Johnson said. “To be appointed by Speaker-designate Pelosi is powerful and inspiring. I look forward to serving in this new role and am committed to a fair and effective legislative process.”

A native of New Orleans, Johnson lives in Maryland, and holds a Juris Doctorate from the Howard University School of Law. She is a member of the District of Columbia and Louisiana Bars, the Nineteenth Street Baptist Church Board of Trustees and the Faith and Politics Institute.

Johnson will replace the current Clerk, Karen Haas, who has served with great dedication and distinction for the past eight years, and in her previous roles under past Speakers and Leaders of the House.

San Francisco — Speaker-designate Nancy Pelosi announced today that she will appoint Douglas N. Letter to be the new General Counsel of the House of Representatives.

Until February 2018, Letter served as the Director of the Civil Division Appellate Staff at the U.S. Department of Justice, retiring this year after 40 years of distinguished service at the agency. He is now a Senior Litigator at the Institute for Constitutional Advocacy and Protection at the Georgetown University Law Center, where he is also a Visiting Professor of Law. He is a recipient of many prestigious honors, including the Presidential Meritorious Rank Award.

“Douglas Letter has an outstanding and highly decorated record of achievement in service of America,” Speaker-designate Nancy Pelosi said. “He will bring deep experience and legal expertise to the House, as he counsels and represents our institution, Members and staff as House General Counsel.”

“I look forward to serving the interests of the House of Representatives and its Members,” Letter said. “I am eager to apply my litigation experience as I take on the challenges and opportunities that come with the important position of House General Counsel.”

After graduating from the University of California, Berkeley Law School, Letter joined the Department of Justice in 1978. He presented oral argument on behalf of the United States in the U.S. Supreme Court, and over 200 times in the federal courts of appeals and district courts. During his career at the Justice Department, Letter served details in the White House as an Associate Counsel to President Clinton, as a Deputy Associate Attorney General under Attorney General Janet Reno and as Senior Counselor to Attorney General Eric Holder. He was elected to two terms on the D.C. Bar Board of Governors, and served in a variety of advisory posts, including on the D.C. Circuit Advisory Committee on Procedures, where he was Chair; the Judicial Conference Advisory Committee on Appellate Rules; and the Ninth Circuit’s panel of attorney representatives. He taught at the George Washington University Law School for 14 years as an Adjunct Professor.

Letter lives in Maryland with his wife; they have two grown daughters. He has given back to his community as a youth basketball, soccer, softball and field hockey coach, and as President of the Board of Directors for the Clara Barton Center for Children.

In January, Letter will replace the current general counsel, Thomas G. Hungar, who has served this institution and protected its interests with great integrity, honesty and commitment to nonpartisanship.