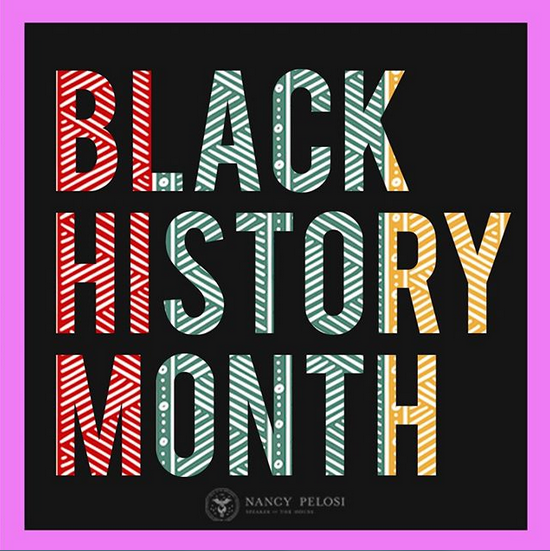 “Each Black History Month, Americans celebrate the proud heritage and innumerable contributions that African Americans have made to our nation. We honor the generations of African Americans who have enriched our society, pay tribute to the tireless activists who have fought to fulfill the promise of America, and recognize the new generation of leaders who have transformed the Congress and our country with their vision and values.

“Yet today, barriers to social and economic justice and access to equal opportunity continue to undermine the success and prosperity of communities of color. In the face of these persistent obstacles, the new Democratic Majority is working to build a future of progress and possibility for all Americans. We are acting to advance fair elections and combat the shameful, brazen efforts to erect barriers to the ballot box for communities of color. We are standing up against the rhetoric of hate and violence that is inflicting pain, heartbreak and division in our communities, and insisting on the truth that Black Lives Matter. And we are pushing forward a bold, ambitious agenda For The People to make good on the promise of the American Dream for everyone by lowering the cost of health care and prescription drugs, raising wages by rebuilding America with green, modern infrastructure, and strengthening our democracy by ensuring that our government works for the public interest, not the special interests.

“This Black History Month, we recommit to opening up opportunity and advancing equality for all Americans. To do so, we take strength and inspiration from the legacy of those who came before us and the courage of our heroes, like Congressman John Lewis, who reminds us that ‘there are still forces in America that want to divide us…But we’ve made too much progress to stop or to pull back. We must go forward.’ Guided by countless leaders, advocates and patriotic Americans we will keep moving toward a future of progress and justice for all.”

Q: Are you talking about the Warriors or politics?

So, here we are. Thank God government is open again and now we can negotiate on what the best way is to have border security to enforce our Homeland Security goals. This is so important, and I hope that any shutdown would be taken off the table as a reasonable approach to governance.

It had terrible impacts, as you know, in the lives of the families affected: by our federal employees who were not receiving their paychecks in a timely fashion; by their communities where, since the paychecks were not coming, the community suffered as well in its own individual economies; and impact on our national economy as well in terms of the GDP, harming GDP growth. It’s harmful to our veterans, many of whom – a third of the federal employees, about 31 percent or a third of our federal employees are veterans. And for veterans, many of them have their jobs because they have security clearance, and security clearance is affected by your credit rating, and your credit rating is affected by your ability to pay your bills on time.

So, it was such a negative impact. And hopefully, we can do something to help our contractors, because they are not getting paid under the present formulation of things, and there’s some initiatives coming forward to help those, especially our low-paid contractors.

So, we know what the consequences of a shutdown are. So, yesterday, we had two bills on the Floor, one of them to say that a shutdown is wrong. And 163 Republicans voted no to a resolution that said shutdowns are wrong. 163 voted. Only 21 voted yes on that. And then there was a federal employee pay raise to make the federal pay consistent with federal pay for the military, and only 29 voted yes on that. 161 voted no. 163, shutdowns are wrong; 161, that federal employees should be paid in a fair way with their increase involved there. So that was unfortunate.

So, what is fortunate is that we have a conference committee that is working in, I think, good spirit. The opening statements yesterday, I think, were promising. House and Senate, Democrats and Republicans.

Again, as an appropriator, I take pride in the ability of the Appropriations Members to reach consensus, left to their own devices without any other interference. I look to them for guidance. They know their brief. They know the dollar amounts. They know the impact of investments, and many of them have experience in all of this.

I was very proud of our conferees, including one relatively new member, Mr. Aguilar, because he’s the Vice Chair of the Appropriations Committee in the House, and he is, therefore, one of the fewer than five-term members. So, we had every aspect of our Caucus represented there.

Border security, those members, our six conferees came forth in a public statement about border security, and they put forth what they saw as the best way, the most cost-effective way to have border security. They talked about 1,000 new customs officers, new imaging technology, and critical repairs at the land ports of entry. As you know, 90 percent of whatever comes into our country in the southern border comes through the ports of entry, whether it’s asylum seekers or whether it is our drugs and the rest of that. So, having more funding to repair and expand the ports of entry is very important. The technology that goes with it, non-intrusive scanning that cars and trucks and all can go right through without stopping and the rest with improved technology, very important.

And then new equipment at mail processing facilities to interdict Fentanyl and other opioids shipped through international mail. That’s a big issue for us. And cutting edge technology, not only at the ports of entry, but other places on the border. And then expansion of Border Patrol of air and marine operations along the border and U.S. waters.

So these, that’s not the total package, but they are some of the major points of discussion, I would hope, as we go forward now. But I was pleased with yesterday. I thought everybody was of good intention, and that is the way the Appropriations Committee usually works.

As this all goes on, we have been, since the election, preparing our For the People agenda: lowering health care costs by lowering the cost of prescription drugs and ensuring that pre-existing conditions benefits continue, lowering health care costs; increasing the paychecks by building infrastructure of America in a green way, from sea to shining sea; and H.R. 1, which is moving along, our integrity in government, to increase the voices of the American people and so that they know that the people’s agenda will happen and not the special interest agenda.

So that, Paycheck Fairness – [H.R. 1] had one of the hearings yesterday. Yesterday, we also had a great ─ this week, we observed the tenth anniversary of President Obama signing the Lilly Ledbetter Act. It was one of the first bills we sent as a Democratic Congress to our newly inaugurated Democratic President of the United States. And his first bill to sign was Lilly Ledbetter, which opened the door to more fairness in the workplace. But it wasn’t paycheck fairness completely.

So yesterday, on that anniversary, once again, Rosa DeLauro, she’s been introducing it I think every Congress for as long as I can remember. We did pass it a number of times when we had the Majority, but we couldn’t get the 60 votes in the Senate so it never was taken up there. Now Patty Murray is the lead sponsor in the Senate on that. And that is equal pay for equal work.

Yesterday was the tenth anniversary, as I’ve said now a hundred times. April 2nd is Equal Pay Day. That is the day at which women start to get paid for their work for the year as opposed to what men make for the year. So, we hope that this bill could be signed into law by that day. All a part of the For the People agenda, for bigger paychecks, lower health care costs, more integrity in government.

Pelosi Statement on Trump Administration Withdrawal from the INF Treaty

San Francisco – Speaker Nancy Pelosi issued this statement after Secretary of State Mike Pompeo announced that the United States will start the formal process to withdraw of the Intermediate-Range Nuclear Forces (INF) Treaty, which bans ground-launched cruise missiles from 500 to 5500 kilometers:

“The Trump Administration is risking an arms race and undermining international security and stability.

“Russia’s brazen noncompliance with this treaty is deeply concerning, but discarding a key pillar of our nonproliferation security framework creates unacceptable risks. The Administration should exhaust every diplomatic effort and work closely with NATO allies over the next six months to avoid thrusting the United States into a dangerous arms competition.

“We must be strong, smart and strategic to keep America safe.”

“The Trump Administration’s rebate proposal puts the majority of Medicare beneficiaries at risk of higher premiums and total out-of-pocket costs, and puts the American taxpayer on the hook for hundreds of billions of dollars.

“Experience tells us that merely trusting Big Pharma to lower its drug prices for consumers is not a solution, it’s a prescription for more of the same. Under the Trump Administration’s proposal, Big Pharma could see even bigger profits and even less restraint on what they charge seniors.

“President Trump must work with Congress to deliver the real, tough legislation needed to actually drive down the price of prescription drugs for seniors and families across America.”