The Weekly Democratic Party Address was delivered by Rep. Barbara Lee of California speaking about Black History Month and the work being done on the For The People agenda.

“James Baldwin used to say: ‘I can’t believe what you say, because I see what you do.’ Leaving the House Chambers on Tuesday after the State of the Union, these words echoed in my head.

“We cannot believe what [the Republican’s president] says, because we see what he has done.

“It is an agenda built on radical truth, on the understanding that every American will benefit from fairer elections, lower health care costs, and higher wages. […] 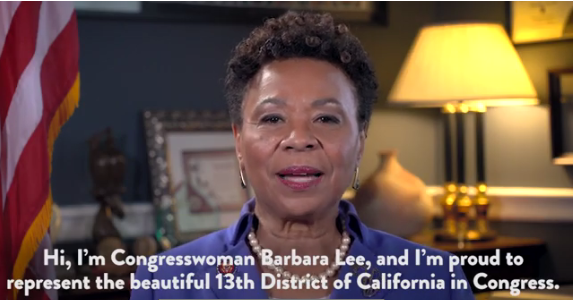 “Every February, we celebrate Black History Month. “But this year is particularly meaningful, as we mark the 400th year since the first African slaves arrived on the shores of America.

“Families were separated, children were taken from their parents, and they entered into lives of bondage and unspeakable cruelty.

“From this painful history, African Americans have risen – to lead our nation, transform music and art, pioneer new inventions, and speak as the conscience of this country.

“I stand on the shoulders of Black leaders who spoke truth to power. “Visionaries like James Baldwin, a clear-eyed social critic who told the stories of disenfranchised African Americans.

“James Baldwin used to say: ‘I can’t believe what you say, because I see what you do.’

“Leaving the House Chambers on Tuesday after the State of the Union, these words echoed in my head.

“We cannot believe what President Trump says, because we see what he has done.

“He has sabotaged our health care system. Lined the pockets of billionaires at the expense of the poor. And presided over the most corrupt Administration in history.

“And after offering a lukewarm pledge of unity in his speech, he then turned around and threatened anyone who would hold him accountable.

“Democrats will follow the Constitution. As one of three co-equal branches of government, Congress will be the check that this President so sorely needs.

“We will work For The People. In fact, we’ve already begun. “One of our top priorities is H.R. 1 – The For the People Act.

“This legislation would safeguard our democracy, expand voting rights protections, and rein in the corrosive influence of money in politics.

“We’re also tackling rising health care costs, because no one should have to choose between refilling their prescriptions or putting food on the table.

“And we’re working to raise wages for everyday families who are still struggling to get ahead, while billionaires hoard wealth at the very top. We will start by rebuilding America’s crumbling infrastructure and creating good-quality, good-paying jobs.

“It is an agenda built on radical truth, on the understanding that every American will benefit from fairer elections, lower health care costs, and higher wages.

“And this February, as we celebrate the Black truth-tellers and change-makers who have transformed this country, I am reminded that this work must continue.

“There are more chapters to be told, more battles to be won.

“Yes – there is more work to be done.

“Four centuries after the first slave ships came to the shores of Virginia, I sit in Congressional leadership as a black woman tasked with building a more perfect union, with liberty and justice for all.

“Thank you for honoring me with this solemn responsibility. I welcome it!

Speaker Pelosi. Good morning. It was a big crowd at the prayer breakfast this morning, and lots of friends to see, so my apologies for running later today.

We’ve had quite a week. Here we are now one month into our Majority. Our committees are appointed. They have re-organized and they’re having hearings. To our For the People Agenda, we’ve started our hearings on lowering health care costs by reducing the cost of prescription drugs. That was one of our opening hearings yesterday. The Energy and Commerce Committee did, Appropriations, and Ed and Labor held hearings protecting the pre-existing condition benefit and reversing the GOP sabotage of the health care bill.

Part two of the For the People agenda – one was lower health care costs, the other was raising paychecks of America’s workers and by building the infrastructure of America. And [today], the Transportation and Infrastructure Committee held its first hearing on investing in roads, bridges, mass transit, ports, airports, schools, water systems and energy grids. The Mayor of Los Angeles participated, and others with experience in this.

Again, number three of the For the People Agenda was H.R. 1, cleaning up corruption and restoring integrity in government. Yesterday, the second hearing was held on H.R. 1, which will reduce the role of big, dark money so that the people’s interest, not the special interest, will have a stronger voice.

In addition, we’ve had two hearings, really the first in eight years, on climate change, one in the Committee of Energy and Commerce, the first time they’ve had a hearing in eight years – Natural Resources as well – now that the Democrats are in the Majority. And I was pleased yesterday to appoint the Select Committee on Climate.

But before I go to that, I was very disappointed that in the State of the Union address, there was no mention on violence in our country caused by the proliferation of guns. And we have our H.R. 8, which we will be bringing to the Floor. We had our hearing this week on that legislation. It will be marked up, and it will be sent to the Floor, hopefully this month.

But it’s a public health issue: clean air, clean water for our children. It’s a national security issue when it comes to preventing climate driven instability. It’s an economic and jobs, jobs, jobs issue. Make good-paying jobs, making America – keeping America preeminent in green technologies in the world. And it is, in my view, a moral responsibility, if you believe as do I that this planet is God’s creation, and we have a moral responsibility to be good stewards of it.

Or if you don’t share that religious view but you just understand that we have a generational moral responsibility to pass the planet on to the next generation in the best possible way, then it has that standing as well.

It is – topic at hand, of course, the conference that is going on now to pass legislation that will, again, keep government open. I don’t think that is a question. But anyway, to protect our borders as we protect our values.

I have asked the Administration to be as non-interventionist as I am on that. Just let them do their work. And hopefully that will – we will get some good news in a short period of time, and certainly in time for the deadline, February 15.

Pelosi Names Members of the Select Committee on the Climate Crisis

“The American people have spoken, and demanded bold action to take on the climate crisis, which is the existential threat of our time,” said Speaker Pelosi. “We are thrilled to welcome so many visionary leaders and strong voices to our new Select Committee on the Climate Crisis, which will be vital in advancing ambitious progress for our planet. Each Member brings great energy and deep expertise to the climate crisis, which jeopardizes our public health, our economy, our national security and the whole of God’s creation.”

“Congresswoman Castor is a proven champion for public health and green infrastructure, who deeply understands the scope and seriousness of this threat,” Speaker Pelosi said. “Her decades of experience in this fight, both in Florida and in the Congress, where she has been an outstanding leader on the Energy and Commerce Committee and on the House Democratic Environmental Message Team, will be vital.”

“This new Select Committee will spearhead Democrats’ work to develop innovative, effective solutions to prevent and reverse the climate crisis. It will generate the energy and action required to permanently reduce pollution so that we can honor our responsibility to be good stewards of the planet for future generations,” continued Speaker Pelosi. “This Committee’s strong and urgently-needed oversight and investigatory actions will be critical to the entire Congress’s work to protect our public health with clean air, clean water and public lands and uphold our sacred moral responsibility to leave a healthy, sustainable future for generations to come, while making America preeminent in green technologies with the good-paying, green jobs of the future.”

A list of members, along with brief biographies, is at the link.