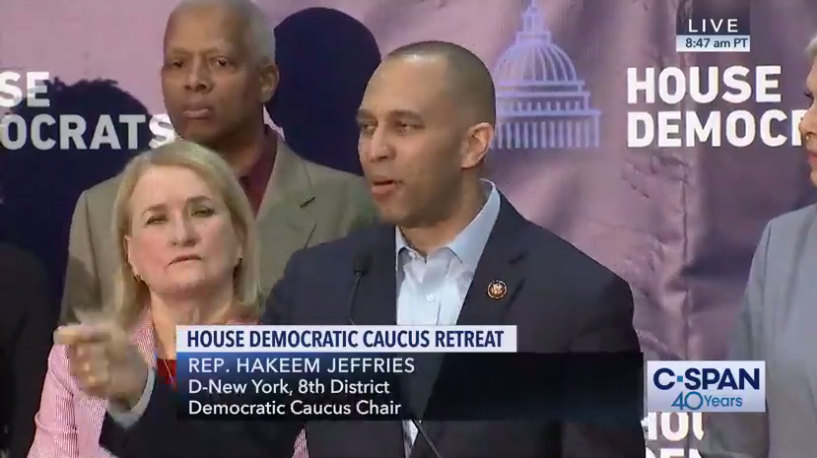 Washington D.C. – Speaker Nancy Pelosi joined House Democrats for a press conference to celebrate the historic achievements made in their first 100 days and outline their #ForThePeople blueprint for the next 100 days. Below are the Speaker’s remarks:

Speaker Pelosi. I was so enjoying being inspired by our speakers I didn’t realize I was next.

In any event, I want to join all of our colleagues who are in the conference room and have saluted the leadership of our Chairman, Hakeem Jeffries, and our Vice-Chair, Katherine Clark, for bringing us together in a very substantive, unifying way this conference. Really a series of workshops where we engaged with each other, and again, For The People.

The Majority For The People means cleaner government and we have to talk about those issues, and how we can be more specific in terms of legislation, more effective in terms of connecting with the American people on all of those scores, because the outside mobilization is what gives us hope. Ten thousand events to save the Affordable Care Act in the last term of office when those assaults were made to the Affordable Care Act. As you know, we’re going to fight it in the courts, we’re going to fight it the Congress, we’ll fight in the court of public opinion as well.

Hallelujah! It’s a cause for celebration. Celebration for what it means in the lives of the American people.

Our meeting was closed by comment of our distinguished inspiration, that is an honor for each of us to call colleague, some of us to call friend, this is John Lewis.

‘We must, we must, save our values and save our democracy,’ was how he closed our session. We see that as our responsibility. So, again, I thanked our distinguished Chair and Vice-Chair, we had a great conference. I also want to acknowledge Tom Malinowski, one of our Freshman Members from New Jersey. Ted Lieu was already acknowledged as DPCC. Sheila Jackson Lee from Texas. And Hank Johnson from Georgia. Very distinguished Member of Congress.

All of the Members are going for the bus now, but we left again, saying what we always say: our diversity is strength, our unity is our power. As our Founders directed, ‘From many, one.’ With that I yield back to the distinguished Chairman, Mr. Jeffries.

The House is in recess. The Speaker’s office issued several press releases marking 100 Days of Democratic Party control of the House of Representatives.

Dear Colleague on 100 Days For The People

Congratulations on 100 days of the Democratic House Majority!

Since day one of the 116th Congress, it’s been our job to deliver on the promises we made to the American people in November: to lower health care costs, increase pay by rebuilding America, and clean up corruption in Washington. We should all take great pride in the incredible progress we have made to advance our For The People agenda.

During the first 100 days of this Congress, we have introduced, held hearings, marked up or passed much of our For The People agenda, and we have plans to continue this momentum over the coming months.

Earlier this year, we passed H.R. 1, the For The People Act, the most sweeping anti-corruption bill in history. We took strong action to raise wages by passing the Paycheck Fairness Act, landmark legislation to secure equal pay for equal work. We have marked up legislation to lower health costs, protect Americans with pre-existing conditions, and reverse Washington Republicans’ sabotage that has needlessly driven up premiums and uninsured rates.

As we move forward to pass key legislation to lower health care costs and prescription drug prices, and raise wages by rebuilding America, we must continue to highlight how House Democrats are united and committed to fighting for kitchen table issues. As we make progress on the legislative battles ahead, we must project the strength and the unity of the entire Democratic Caucus.

As we enter this April District Work Period, we cannot allow ourselves to become distracted by the chaos and crisis coming from the White House and Washington Republicans. Instead, we must cut through the noise and make ourselves heard on these issues that matter most to all Americans. To do this, we must focus on the legislation we have passed and the headway we are making on the For The People agenda.

During the District Work Period, we must capitalize on the momentum we’ve built over the last 100 days and we must show our constituents why it was important to elect a Democratic Majority. We encourage all Democratic Members to promote the For The People agenda through town halls, roundtables, panel discussions and across digital platforms.

Thank you for your leadership and your continued commitment to these efforts, we would not have been able to achieve these goals without every one of you. We look forward to continuing to work with you to communicate our ideas and show how Democrats are fighting For The People.

The First 100 Days By the Numbers

The new House Democratic Majority was elected to deliver progress For The People: fighting to lower health care costs, reduce prescription drug prices, increase paychecks by rebuilding America, and clean up corruption in Washington and more.

Here’s some key numbers for understanding the first 100 Days:

More than 35: Hearings on infrastructure

35: Number of days before President Trump agreed to reopen the federal government

130 million: Number of nonelderly people in the US have preexisting conditions

20 million: Number of Americans who would lose health coverage if Republicans’ Texas v. U.S. is successful

75: Percent of 2018 voters in battleground districts that said cracking down on Washington corruption was their top priority.

185: Republicans who voted against calling on the Department of Justice to end support for the dangerous Texas v. U.S. lawsuit that if successful would result in 20 million Americans losing health coverage

11: Number of votes that were taken to reopen government and let federal workers get back to work

$7 billion: Amount of money Trump is trying to illegally transfer to build his wall