The Weekly Democratic Party Address was delivered by Senator Mark Warner of Virginia calling out Republicans for their refusal to pass laws protecting our elections.

"Congress must work together to protect our democracy and reassure Americans that their votes will be counted in 2020. We cannot let election security become another tombstone in the Republican Senate’s legislative graveyard." —@MarkWarner pic.twitter.com/EVjzbfA5cO

“Congress must work together to protect our democracy and reassure Americans that their votes will be counted in 2020. We cannot let election security become another tombstone in the Republican Senate’s legislative graveyard.” 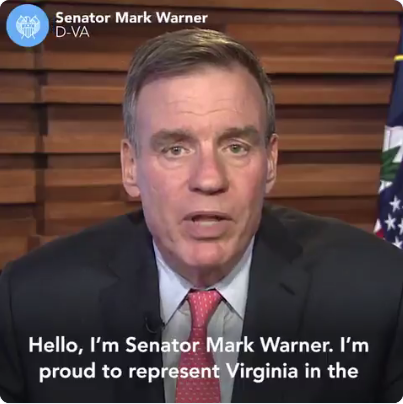 A transcript from the closed-captioning is available on CSPAN.

Here we are – day of orange, gun violence prevention.

We were all in front of the Capitol to, once again, express support for the Senate to pass the legislation that we already passed in the House for commonsense background checks and gun violence prevention, hence the color orange.

Yesterday was really a great day for us in the House. We passed the Dream and Promise Act with 100 percent of the Democrats voting yes, and it was bipartisan.

Again, as President Reagan has said – he said, ‘If we ever close the door to new Americans, our leadership in the world would soon be lost.’

That was his last speech as President of the United States. You’ve heard me say that time and time again. One of our speakers yesterday used that arguing against a Motion to Recommit, which we resoundingly won as well – defeating it.

And, again, it’s a happy – really a happy day, because our Dreamers, they’re the gold standard. They love America. They’re patriotic. They serve in our military. They teach in our schools. They help with health care. They came here as children and are not to be charged for an action that they did not decide to take. And yesterday was fabulous, but not only the Dreamers but Temporary Protected Status and DED people as well.

So, I congratulate Jerry Nadler, Members of the Judiciary Committee, particularly, Zoe Lofgren. Zoe Lofgren is a virtuoso – masterful at many subjects, but in this case, she is an immigration lawyer. She taught immigration law and she is Chair of the Immigration Subcommittee. And, she was able to orchestrate something quite wonderful. It was not without its challenges, so I congratulate them all for that.

I was personally gratified yesterday that as we observed the 30th anniversary of the Tiananmen Square massacre – that tragedy where the Chinese Government crushed with tanks young people. People all over the country were turning out, but probably a million in Tiananmen Square, and they crushed them with tanks – probably thousands, certainly hundreds.

But yesterday, 30 years later, we had observances all day: a hearing in the morning, a rally outside, legislation on the Floor and 100 percent of the House of Representatives voted for the commemoration of the 30th anniversary, sadly, of Tiananmen Square.

It was very, very – I was – I was just thrilled, because the Chinese Embassy was making their threats and making their calls, but we got 100 percent on that.

This morning, as some of you may know, I signed the – enrolled the legislation for the disaster supplemental bill. And, really, I commend our appropriators. They passed two bills in the House: one, many months ago and then another to address the – to address the additional disasters that had hit us.

Finally, after much inaction, finally the Senate passed legislation, sent it over to us. And, what, three times Republicans objected to the bill being taken up. So, we’re a couple weeks late, even compared to the Senate inaction, in getting this support out to the American people.

So, any delay just stirs despair. They get scared that it’s not ever going to happen. So, it was shameful that the Republicans allowed three of their Members to hold up this legislation for about – until Monday night when it was finally passed by the House with a huge, huge vote. So, there we are.

And, you know, on Sunday, we observed 150 days – this past weekend, 150 days since we’ve been in the Majority and I’m really excited to say that in our top ten bills that, most of which, we had passed on the Floor.

As far as women are concerned, paycheck fairness, equal pay for equal work: 100 percent. Violence Against Women – huge, like 99 percent vote in the Congress. Again, affecting women but families in general.

In terms of safety, our background checks legislation: 99 percent.

And then, of course, all of our legislation for our veterans was overwhelming and bipartisan.

The list goes on and on. We’re very proud of the work that we have done to send over to the Senate where Mr. McConnell has said he’s the Grim Reaper. It’s a Senate graveyard. We have news for him: all of these issues are alive and well in the public and he will be hearing from the public and hopefully very soon on Dream Act, gun safety, the list goes on.

What else do we have going here, now?

We have – oh, yes. While we legislate, and we’re very proud of our legislation, true to our For The People agenda: lower health care costs by lowering the cost of prescription drugs and preserving and strengthening the pre-existing condition benefit, bigger paychecks by rebuilding infrastructure in America in a green modern way for the 21st century and cleaner government, H.R. 1, For the People Act, to end the role of big, dark special interest money in politics, strengthening voting rights, ending the voter suppression.

When we’re talking about infrastructure, I want to just go back to the disaster assistance bill. I think we could consider that the first big major investment in infrastructure, building infrastructure of our country. A very large commitment to that, including in Puerto Rico.

And now, today, I am proud to lead a bipartisan congressional delegation to Normandy. Tomorrow will mark 75 years of D‑Day – 75 since D‑Day – one of the greatest acts of heroism in history, when our military and allies deftly defied every danger, every evil, and overcame them.

Anyway, we went four years – five years ago – and spent time with the veterans – that’s our purpose. We’ll go again now, spending time, thanking the veterans who are there. It’s quite remarkable. We have a large bipartisan delegation. I’m sure you’ll be hearing more about it.

Speaker Pelosi made this comment about the upcoming trip to Normandy and made the point that D-Day was not just one-and-done but the start of a grueling campaign that would result in many more lives lost (lighted edited).

Five years ago, when we went there, our purpose was to thank the veterans.

So, I said to them, oh, just in the course of conversation, ‘My uncle, John D’Alessandro, he died at the Battle of the Bulge.’ And they said, ‘Oh, yeah, we went there. We went there next.’

You landed at Normandy. You climbed the wall, the hills, and all the rest, and you didn’t get a chance to just go home after that. They just fought on and the Battle of the Bulge was months later; they fought their way to that.

But imagine their courage – imagine the courage of these people, and they were so young. They were like babies. They were college age, if not seniors in high school, some of them. Some a little bit older.

So, we’ll go to thank them. I think that in the future, we may decide that we should have this every year instead of every five years, because five years will be a long time for many of them to be there.

Pelosi Statement on May Jobs Report

Washington, D.C. – Speaker Nancy Pelosi issued this statement after the Department of Labor issued its May jobs report, which showed that the economy created just 75,000 jobs:

“The May jobs report is a disturbing sign that the Administration’s disastrous special interest agenda is hollowing out our economy, fueling instability and jeopardizing the financial security of working families across America.

“While the wealthy and well-connected enjoy massive windfalls from the GOP Tax Scam for the rich, countless hard-working Americans are one unexpected expense away from financial ruin. Families across the country need decisive action to strengthen their health and financial well-being, not more special interest giveaways and reckless threats from the President that threaten to sow chaos in our economy.

“House Democrats are fighting For The People, delivering results on issues that matter in their lives. Our House Majority is acting to lower the price of prescription drugs and protect health benefits for Americans with pre-existing conditions, to raise wages by rebuilding America with bold investments in green, modern, job-creating infrastructure, and to clean up corruption to make Washington work for the public interest, not the special interests. We will continue to advance progress so that our communities, our economy and our nation can grow and thrive.”

2 comments for “Fighting Back: “Congress must act on election security to protect our democracy.””