The Weekly Democratic Party Address was delivered by Senator Chris Murphy of Connecticut reminding people that there is only one political party that cares if you have affordable health care.

“Democrats are fighting to protect your health care by opposing Trump’s junk plans and his dangerous lawsuit.

Because to us, there’s nothing political about making sure everybody gets good, affordable health coverage.”

“Democrats are fighting to protect your health care by opposing Trump’s junk plans and his dangerous lawsuit. Because to us, there’s nothing political about making sure everybody gets good, affordable health coverage.” 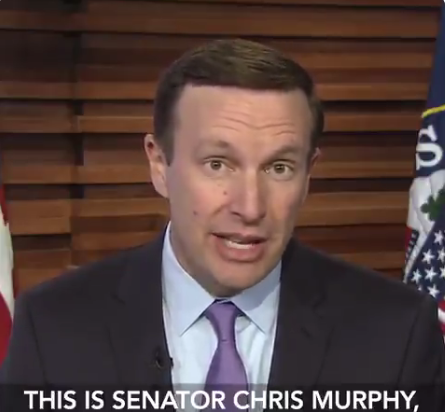 No transcript was available but the CSPAN video of the address usually has closed captioning and should be posted at their web site later on Saturday.

Washington, D.C. – U.S. House Representative Annie Kuster (D-NH) and U.S. Senator Mark Warner (D-VA) today led House and Senate Democrats in unveiling a Congressional Review Act (CRA) resolution that would roll back the 1332 waiver rule, another Trump administration effort to sabotage Americans’ health care and another attack on the 130 million Americans who rely on the critical pre-existing condition protections the administration is trying to eliminate. The rule, if left in place, would allow states to greenlight substandard, junk insurance plans that don’t fully protect people with pre-existing conditions, don’t cover essential health benefits like prescription drugs and maternity coverage, and raise costs on many American families. Under the Congressional Review Act, this resolution must be considered within 60 legislative days and can pass the Senate with the support of a simple majority of Senators.

“Americans are tired of political attacks on their health coverage, but the Trump Administration continues its efforts to limit access to health care, undermine protections for millions with preexisting conditions, and sabotage the Affordable Care Act,” said Representative Annie Kuster (D-NH). “We cannot return to the days when individuals living with preexisting conditions could be denied coverage or charged higher rates for care. I was proud to see the House pass my legislation – the Protecting Americans with Preexisting Conditions Act – to reverse a Trump Administration rule promoting the sale of junk plans that endanger our health care system and don’t cover preexisting conditions. I’m pleased to join my colleagues in support of this commonsense measure, and I hope that my Republican colleagues in the Senate will support this resolution to strengthen preexisting conditions protections for their constituents and for all Americans.”

“It’s clear that the Trump Administration is determined to limit Americans’ access to health care and undermine protections for millions of people with pre-existing conditions,” said Senator Mark Warner (D-VA). “The junk plans pushed forward by this Administration will inevitably disrupt our health care system, stripping basic coverage while increasing costs for Virginia families. Congress should protect coverage for vital services like prescription medicines, visits to the emergency room, and maternity care by overturning the Administration’s ill-advised plan to expand the use of junk plans. We have an opportunity here to send a message to the President that instead of attacking the Affordable Care Act, he must work with Congress on targeted, bipartisan fixes that will lower health care costs and expand access to comprehensive, affordable health care coverage.”

“House Democrats have worked tirelessly to pass legislation to strengthen protections for people with pre-existing conditions and stop the Trump Administration’s relentless efforts to destroy them,” said Speaker Nancy Pelosi (D-CA). “Now, Leader McConnell and Senate Republicans will have to vote and show whether they will listen to the American people and join Democrats to protect people with pre-existing conditions, or whether they will continue to be full accomplices in gutting these life-saving protections for American families.”

“President Trump is proving yet again that we have to believe what he does, not what he says. That he can claim to care about protecting Americans with pre-existing conditions, while simultaneously rolling back pre-existing condition protections, reeks of the utmost hypocrisy,” said Senate Democratic Leader Chuck Schumer (D-NY). “I challenge my Republican colleagues who claim to support pre-existing condition protections to actually do something about it, and join us in voting in favor of our resolution to get rid of this harmful rule. When Senate Democrats force a vote on this resolution, we will see if Republicans finally put their money where their mouth is.”

“Republicans are hiding their position on pre-existing condition protections from the American people,” said Senate Committee on Finance Ranking Member Ron Wyden (D-OR). “Over the last two years, Trump and his allies in Congress have perpetrated attack after attack on the idea that nobody should be discriminated against because of a pre-existing condition. The Section 1332 that I wrote was created so states could do better than the Affordable Care Act, but they can’t do worse. That means covering the same amount of people, without raising premiums or cutting benefits. The Trump rule tosses those principles out of a window. Democrats are united with the overwhelming majority of voters – a Republican vote against this resolution is a vote against pre-existing condition protections.”

“As usual, Democrats are leading the fight to protect Americans from health care plans that don’t cover pre-existing conditions or essential health benefits,” said House Committee on Ways and Means Chairman Richard E. Neal (D-MA). “Republicans claim to support those protections too – this is their opportunity to prove it. Undoing this damaging Trump Administration rule will help families avoid paying higher prices for less care.”

“Our resolution offers a simple measure of who is trying to fight for patients with pre-existing conditions, and who is trying to score political points by throwing them under the bus,” said Senate Committee on Health, Education, Labor, and Pensions Ranking Member Patty Murray (D-WA). “People across the country are going to be watching closely whether Republicans do the right thing and join Democrats to protect patients and families.”

“There is no evidence-based rationale for expanding access to junk insurance plans. The administration’s efforts to erode protections for Americans with preexisting conditions will lead to higher costs and fewer protections for individuals and families across the country,” said House Committee on Education and Labor Chairman Bobby Scott (D-VA). “Democrats are resolute in our commitment to stand up for Americans’ access to quality and affordable health care.”

“For the hundreds of millions of Americans who have pre-existing conditions like arthritis, cancer, heart disease, asthma, diabetes, kidney disease, or pregnancy, this administration does not support protecting your right to affordable health insurance. The 1332 Waiver Guidance is quite possibly the most blatant example of this administration’s lack of support of protections for those with pre-existing conditions,” said Senator Ben Cardin (D-MD). “Congress must act to protect Americans with pre-existing conditions from being left with higher out-of-pocket costs for less services, which can put their health in jeopardy.”

“The Trump administration has already destabilized the insurance markets by supporting litigation to strike down the Affordable Care Act in its entirety, putting insurance coverage for 90,000 Granite Staters and 20 million Americans at risk. On top of that, this administration has put forward waiver rules to continue to sabotage the ACA and further drive up health care costs for millions of Americans. But we’re not going to stand by without a fight,” said Senator Jeanne Shaheen (D-NH). “Today we’re introducing this Congressional Review Act resolution to block the Trump administration from sabotaging the ACA through these state waivers. We know that these waivers could substantially increase costs for comprehensive coverage and leave many people with pre-existing conditions with no affordable options. We cannot let that happen. I’ll stand ready with Senator Warner and my colleagues to defend the insurance protections that patients across this country rely upon.”

“This new rule is the latest in a series of efforts by this administration to sabotage the American health care system,” said Senator Chris Murphy (D-CT). “Far too many people in Connecticut are scared of going back to the days before the Affordable Care Act when insurance companies could jack up your rates or deny you coverage simply for having a pre-existing condition. If my Republicans colleagues care about helping people with pre-existing conditions then they will join us in voting for this resolution to get rid of this disastrous rule.”

A list of sponsors and the organizations that support the resolution is at the link.

Washington, D.C. – Speaker Nancy Pelosi released this statement on the progress of the House’s investigations:

“When we take the oath of office, we solemnly vow ‘to support and defend the Constitution of the United States against all enemies, foreign and domestic.’ The Mueller report states unequivocally that Russia interfered in the 2016 election ‘in sweeping and systematic fashion.’ And the Intelligence Community informs us that Russia is working 24/7 to undermine our elections. This assault on our elections is a serious national security matter which the President chooses to ignore.

“To protect our democracy and our Constitution, Democrats in the Congress continue to legislate, investigate and litigate.

– Last week, Jerry Nadler, Chair of Judiciary, took a significant step when he filed a petition to obtain the grand jury testimony underlying the Mueller report, for the House to ‘have access to all the relevant facts and consider whether to exercise its full Article I powers, including a constitutional power of the utmost gravity — approval of articles of impeachment.’
– Elijah Cummings, Chair of Oversight and Reform, is winning in court in the Mazars case, seeking the President’s financial statements and reports prepared by his accountant to determine financial conflicts, violations of the Emoluments Clause, and the truthfulness of representations contained in the President’s statutorily required financial disclosure forms;
– Maxine Waters, Chair of Financial Services and Adam Schiff, Chair of Intelligence are winning in court in the Deutsche Bank case, seeking the President’s bank account records to assist with the Committees’ investigation of unsafe banking practices, including money laundering, illicit transactions and foreign investments;
– Richie Neal, Chair of Ways and Means, is pursuing the President’s tax returns to assist with the ongoing investigation of the IRS’s presidential tax audit program;
– Eliot Engel, Chair of Foreign Affairs, on another front, is investigating the Russia connection with hearings seeking the facts from the Trump-Putin meetings;
– In addition, last week, the House voted to reiterate its oversight authority, and ratified and affirmed the subpoenas already issued by the committees and any subpoenas to come. Responding to the subpoenas gives the President an opportunity to provide information that could exonerate him. If he has nothing to hide, he should cooperate with the subpoenas.

– Our litigation has been strengthened by the months of work from our six committees which are engaged in the investigations. 54 percent of House Democrats serve on these committees engaged in hearings and investigations, and I am very proud of their work.

– We have sent the Securing America’s Federal Elections Act to the Senate. However, Mitch McConnell refuses to take up this legislation or any other legislation to protect our democracy. Why do the President and the Republican Leader in the Senate choose to protect Russia rather than to protect the integrity of our elections? We will continue to lead a drumbeat across the country demanding the GOP Senate act.

“In America, no one is above the law. The President will be held accountable.”

As of this morning, a majority of House Democrats now support an impeachment inquiry: NPR is tracking it here. 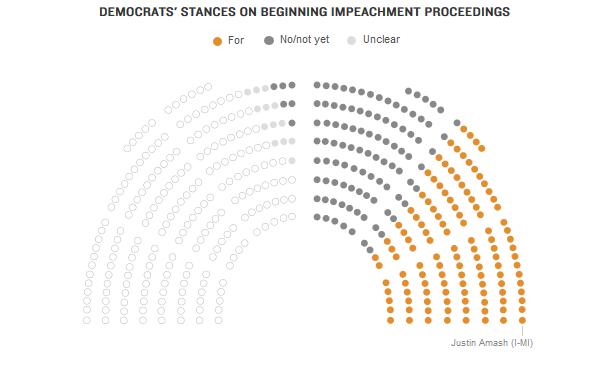 In a symbolic milestone, a majority of House Democrats are now publicly backing an impeachment inquiry into President Trump.