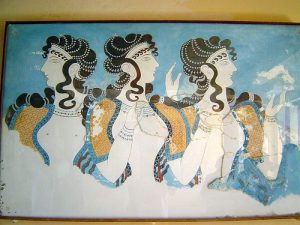 Flung back in time to the Minoan Crete of 1450 BC, can Fiona adjust to such a different world?

“Put your arms around me and hold on as tightly as you can,” Jolyon said. He stepped closer until just a breath separated us. I did as he instructed. A vast shudder rippled through us, after which utter blackness descended and I knew nothing more.

When I regained consciousness, very slowly, I became aware through closed eyelids that it was daylight. Gradually the realization dawned that I was lying down, covered by a warm blanket, and that I could hear voices. Two of the voices were male, speaking English. A third voice sounded feminine and the language was not English.