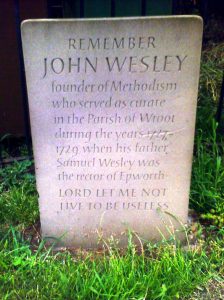 After several years of this, God finally replied and God’s booming voice rattled Moishe more than a little bit. “Moishe,” God said, “meet me half way. Buy a ticket.”  (Hey, God, the Joke’s on You!)

Although the joke above came from a Reformed Judaism website, as far as I’m concerned, the joke could have been written by anyone, for anyone…except for a Methodist.  Methodists are not supposed to buy lottery tickets; the stance against gambling in any form goes back to the beginnings of the Methodist movement and even today  is enshrined in the social principles (What does the UMC say about gambling?) While the Methodist position on gambling may not be commonly-known or understood (sometimes even by church members), the general public would generally view the principled stance as part and parcel of Methodist DNA. The reputation of the church has long been described as mostly liberal and a leader on social justice issues. That reputation is part of the reason the current homophobic, anti-LGBTQI policies and practices of the church are so baffling to non-Methodists. I would argue, as a lifelong Methodist, that both the policies and the recent, proposed protocol for change are far more consistent with Methodism than most assume, and our reputation is a combination of aspiration and reality; history and hagiographic storytelling; and inspiration and contrivance. This is only one Methodist’s opinion (and these days, I’m more lapsed than not), but after reading the proposed protocol, what some people are calling “schism” in the United Methodist Church, I am considering to be the logical conclusion to an unnecessarily torturous process.