The Village News & Views October 11, 2017
Wednesday Get Over the Hump Free for All 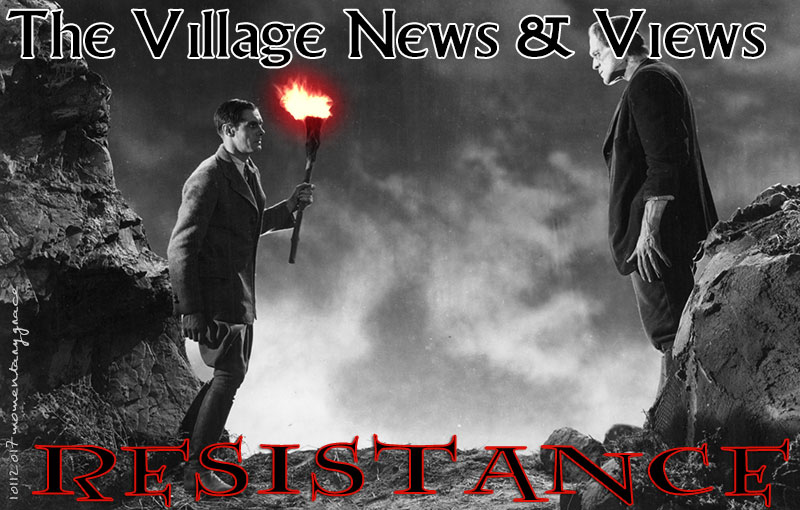 Greetings, Village Meese. It’s Day 264 of the Resistance and time for another Get Over the Hump post and discussion thread.

On Sunday Republican Senator Bob Corker went on the record questioning the current WH occupant’s competency. While most of us have been doing so all along, not to mention Secretary Hillary Clinton flat out warning what was coming during the campaign if her opponent were elected, the Republicans, especially those still serving in elected office have been careful to keep criticism of the bundle of ego in chief off the record and behind closed doors/muffling hands/fake coughs etc.

He is their Monster. They are all enabling him as they greedily try to scrape whatever they can get out of the erratic yet systematic wrecking of the United States Federal Government. They opposed him during their own primary, or some of them did, yet he is their Monster – assembled from the worst severed parts of their “Conservative” policies, their race-baiting and voter-suppressing campaign tactics, and their secret authoritarian, white supremacist and totalitarian dreams.

Enjoy your moment in the spotlight, Senator. Meanwhile, the #Resistance will keep fighting for hope, for those who are being harmed, and for a better future.

And, no, we won’t forget how we got here. Never.

Politico – Hacker study: Russia could get into U.S. voting machines

WaPo – TL;DR: Black women have always been on the front lines of social justice

Life at last! Salutations from the other side
I can see that you’re the devil’s pride
Do you realize that all of you donated something horrible you hated that is part of you
I’m your nightmares comin’ true I am your crime

And locked up here inside our spirit
Is the child that we are, hear it
Some of us will always fear it
And some will heed the cry

This hasn't gotten enough attn: For the first time, Congress missed the deadline to reauthorize the Children's Health Insurance Program. 1/7

There are so many stories of young people whose lives have been transformed by CHIP. Sara's is one: https://t.co/i2o8d4mMsb 3/7

The test of any society is how it treats its children. We cannot allow millions of kids to lose access to basic health care. 5/7

.@HillaryClinton just gave a terrific speech on how to defend our cyber sovereignty. Read the speech! pic.twitter.com/rUx09BLHLI

Profiles in Courage, thanks DoReMI!

5 years ago, I was shot in an attempt to stop me from speaking out for girls' education. Today, I attend my first lectures at Oxford. pic.twitter.com/sXGnpU1KWQ

Strong skills in science and engineering are important — doesn't matter if you are male or female. I've had an amazing career with NASA! https://t.co/gYOUF5bZoR

On this #IndigenousPeoplesDay, I want to uplift the name of Dr. Isabella Abbott, the first Native Hawaiian woman to earn a PhD in science. pic.twitter.com/52KyiGdXlD

One Of The Last Remaining American Hero Navajo Code Talkers From WWII, Passed Away… https://t.co/Z3GM8Mkias

I worked 8 yrs w/ mayors from both parties. You can’t afford to “filter out” what your hear from duly elected representatives of Americans. https://t.co/GpwZndiHAs

#PuertoRico update from #nurses: People stop to get water that's running off the mountain side. #UnionsUnited pic.twitter.com/xwbD6yHgqQ

Breaking: Governor of #PuertoRico Raises Death Toll to 43. Only 16% of Customers have Electricity

Researchers are working to better understand the flashes and glows that can appear above lightning and thunderstorms. pic.twitter.com/7ORB6hQ6YO

My caption for below – the insulation in that coat must be amazing… also, Frosted Flakes… They’re GRRRRRREAT!

This is Maddie. She’s been puparing her costume all year. Has graciously given us a sneak preview. 13/10 the hero we need, but don’t deserve pic.twitter.com/Gwe3nYJjFK

Could this cat run for President? Please?