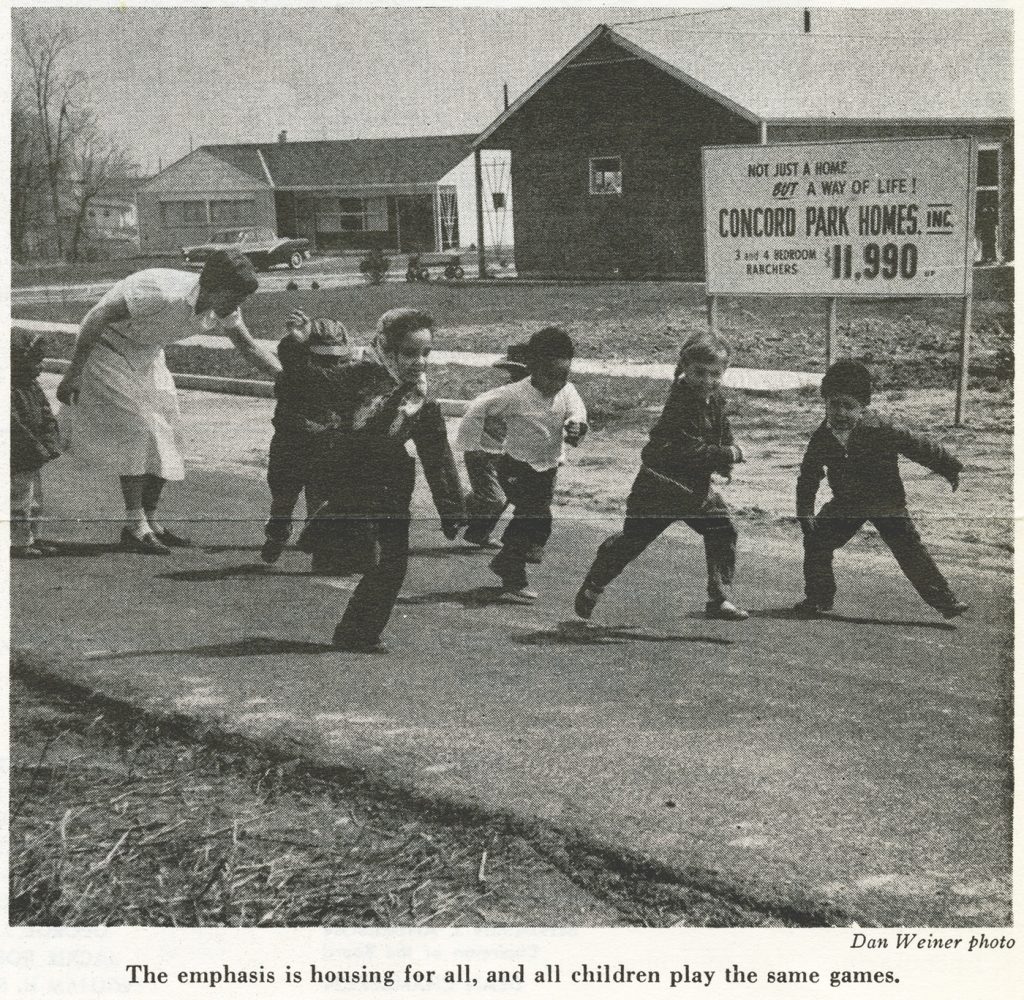 Morris Milgram was a dreamer and an activist first, a homebuilder second.

An ardent antifascist and peace activist, member of the Student League for Industrial Democracy and Student Strike Agains the War, Milgram was expelled from the City College of New York in 1934 after leading protest against a visiting delegation of fascist students. In the late 1930s, Milgram served as New Jersey executive secretary of the Workers’ Defense League… During World War II, …Milgram became the national secretary of the WDL. The WDL had a long record of supporting racial equality, which it saw as inseparable from “labor’s rights.” …Closely allied with CORE and the March on Washington Movement, Milgram advocated nonviolent civil disobedience. Source: Sweet Land of Liberty: The Forgotten Struggle for Civil Rights in the North by Thomas Sugrue, p. 230-31

By 1947, with a wife and a young family, Milgram made the decision to take mainstream employment and started working for his father-in-law’s construction firm. Although he did not have a background in any area of construction (his degree, completed at Dana College, was in economics), he spent four years learning the ins-and-outs of marketing, tax codes, zoning laws, and construction finance, all while working with his father-in-law to build housing for whites-only in the Philadelphia suburbs. It was not a happy choice for him (“my conscience hurt”), but it was, according to his father-in-law/boss, the way things were done. After his father-in-law died in 1952, Milgram decided to pursue his dream of creating open housing, an interracial alternative to Levittown.

The dream was the easy part; the reality was far harder. Banks and investors had zero interest in supporting an integrated housing project; in his first year of trying to fund the project, he only raised $14,000. Fortunately, being in a Friends’ stronghold helped to save the project. The American Friends Service Committee (AFSC) introduced him to George Otto, a builder, Quaker, and the chair of the Philadelphia Friends Social Order Committee. Otto was interested in and sympathetic to Milgram’s dream, and they formed a corporation together, which enabled them to sell stock shares to friends and associates. Although the story of Concord Park will always be Morris Milgram’s story, the contribution of George Otto cannot be underestimated. He came from an old Quaker family and had connections throughout the Quaker community, particularly with Quakers as wealthy as himself. Between the two, with Milgram providing the moral argument, “Put your money where your heart is” and Otto providing the reassurance that this was a sound investment, $150,000 in venture capital was soon raised. A board of directors was formed, made up of six white and three black men, and with the initial capital two tracts of land were purchased: 50 acres in Trevose, PA (and only about 11 miles from Levittown), as well as a smaller plot of 9 acres in northeast Philly. 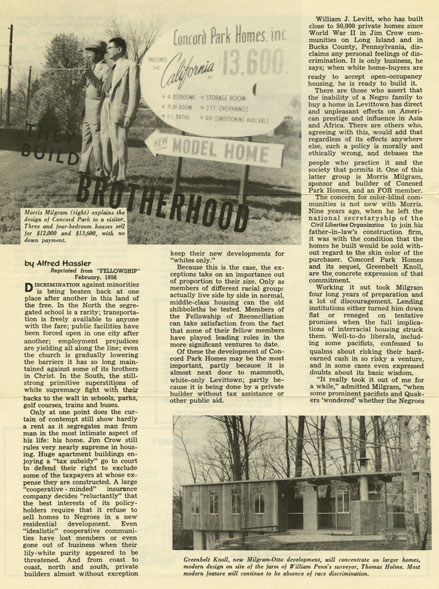 An article printed in a Fellowship of Reconciliation publication

Raising the initial capital was only the first battle; from there, Milgram had to ensure that mortgage financing was available. At this point, the project almost crashed and burned as more than 20 banks and financial institutions turned them down. For bankers, the conventional wisdom was that blacks lowered property values, so it made no sense to them to provide the financing. After much searching and with the corporation on the brink of ruin, one bank came through. A New York bank, with experience lending to African-Americans, agreed to finance some of the mortgages.

Milgram’s Concord Park homes were similar to those in Levittown, an intentional decision by Milgram, but because he lacked the economies of scale and the vertical integration of Levitt and Sons, they were slightly more expensive. Despite that, when his model home opened in 1954 (decorated by the same designer the Levitt’s used), 25,000 passed through in four months, 95% of whom were white. Milgram had marketed heavily to white communities (although not always mentioning that this would be open housing) and relied on word of mouth throughout black communities. However, when actual applications started coming in, Milgram was dumbfounded to discover that of the first 60 applicants, 50 were black. He had anticipated that securing the first sales to white families would be difficult, but he had not taken into account the pent-up demand for suburban housing for black families. “I woke up one night in a cold sweat and said to myself, ‘Morris, you s.o.b., you’re building a ghetto.'” (Sugrue, p. 233) 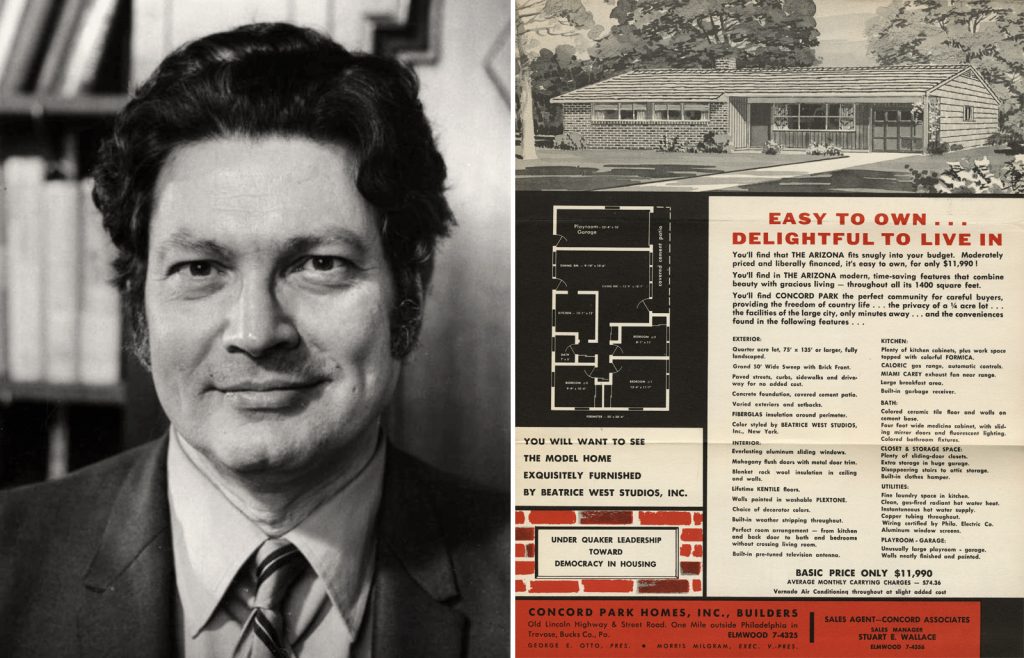 With the dream of integrated housing once again in danger, the board of directors for Concord Park were faced with a difficult decision. Did they set aside their initial goal and instead meet the demand of black buyers? Could they afford to wait for white buyers to move in? Finally, in 1955, the board made a difficult, controversial decision. They established a quota system, with 45% of the homes to be sold to black families and the remaining balance (55%) to white buyers. Milgram himself had suggested a 50/50 split, but one of the black board members, a former president of Florida A&M, suggested the 55/45 split to assuage white fears about losing the majority. By 1958, all of the 139 houses in Concord Park were built and sold; the ratio had been maintained.

For years, the dream played out just as Milgram had hoped. There was no violence as the Concord Park houses sold, and the development had social clubs; residents played bridge together; a babysitting cooperative was formed. It was 1950s suburbia in every imaginable way for the black and white residents. For a period of time, the ratio was maintained, in part because Milgram had owners sign an agreement which allowed the corporation to take responsibility for the resale. In 1968, the Fair Housing Act was law, and quotas became illegal; by the 1970s, cookie cutter tract housing, so necessary during the post-WWII housing shortage, lost their popularity, and white occupants of Concord Park started moving out…because they could. Although fair housing was by now the law of the land, housing discrimination still existed, but black buyers could still buy in Concord Park. So they did; the last, original white homeowners moved out in 2000, but Concord Park had become a majority-black development years before.

Next week: Was Concord Park a success or failure? And more Milgram…