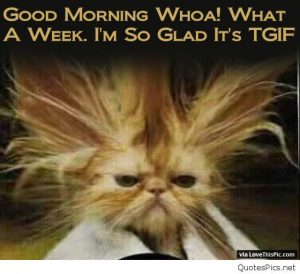 The IG report was what we expected it to be, conformation that James Comey used his position indiscriminately to cover his own ass. I’m hoping the report goes the way of the dinosaurs and disappears now that we got confirmation. The longer it sticks around the more we’ll hear the Trump sycophants use it for their own false narrative.

As SBG points out…

Dear @mattgaetz @RonDeSantisFL & @RepAndyBiggsAZ – just be honest. You want those so you can put out another fake memo so you can protect the corrupt criminal masquerading as President, who keeps smearing DoJ in order to cover his own ass & discredit them. NOT HAPPENING. Go away.

My reasoning for wanting the IG report to go away…Cohen and Manafort’s day in court today is more important to take center stage.

Until the additional report that we’ve read about concerning NY FBI and Ghouliani and what was leaked, which is more important by leaps and bounds than the one released Thursday becasue it could very well bring down charges by DOJ against all involved.

I’m inclined to believe that Rod Rosenstein’s appearance at the WH that coincided with the release of the IG Report might have something to do with the additional report that I mentioned above. Reasoning being that I believe the report by the IG in reference to the criminality of Rudy and the NY FBI agents has already been written up and Rod has it in his possession already.

Excellent breakdown of the IG Report…

The morons have finally started to use their hypocritical Christianity in an attempt to legitimize their bullshit policies and try and use it to make way for their idea of theocracy.

Pence tried and got shot down very quickly…

Pence just told 10,000 at the Southern Baptist Convention how wonderful tRUmp is working to END the Johnson Amendment protecting separation of church and state… It bombed and the leader later called him out on it! pic.twitter.com/ADX3rvnyYM

Oh, fuck you, Sarah Sanders and Jeff Sessions, for bringing your bullshit version of Christianity into this. How is it "biblical" to tear breastfeeding babies from their mothers?

I mentioned on air to @NicolleDWallace today that the best response to Comey's justification for departing from the rules was this quote in the IG report from longtime national security prosecutor George Toscas. Worth a read. pic.twitter.com/Q6nGilcBC9

What I was talking about above…The crucial part of the IG Report not yet released.

Source briefed on the IG report says issue of alleged leaks to Rudy about Clinton investigation info isn't limited to what's in this report. More info to come on that later.

The release of this Inspector General report confirms what has been clear for some time: though FBI leadership made errors in judgment in the run-up to the election, those actions were not influenced by any political bias and, if anything, helped Donald Trump’s candidacy.

The bots & trolls are out in full force attacking FBI Director Christopher Wray and calling for him to resign/be fired because he accepted the findings of the #IGReport instead of indulging Trump's "deep state" conspiracy theories. pic.twitter.com/mju6dqF8lH

Nice birthday present you got there Dotard… LOL

Remember when tan suits and dijon mustard were a scandal. #NeverForget pic.twitter.com/KMRUIR0o8s

That’s it for this weeks TGIF…

Have a great weekend…