The Weekly Democratic Party Address was delivered by Senator Mazie Hirono of Hawaii.

“These are not normal times. On issue after issue, Donald Trump creates a crisis, blames others for what’s happening, and uses the ensuing chaos to demand a legislative solution that often harms even more people. Democrats are calling on President Trump to use his executive authority to reunite the 2,400 separated children with their parents. We are calling on him to resolve many other problems his executive order created. And we are calling on his administration to stop its sabotage of our health care system and work with us on a bipartisan basis to protect and improve our health care system.” 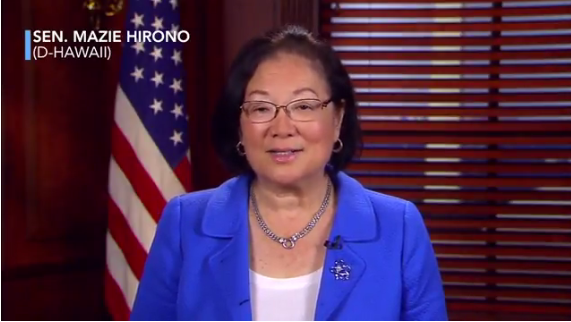 A transcript will be added if one becomes available. Here is a link to an interview of Senator Hirono from June 21st. Snippet:

Immigrants need their families around them in order to thrive and to be happy. Who wouldn’t want to have your family around you if you are going to a whole new country? You don’t know anything. You don’t know the language and you’re just struggling. So family unity is a guiding principle, and this separation of little kids from their parents goes totally against any notion of family unity in immigration.

In my own situation, I came here with my mom and we were latchkey kids. So this really brought back what it was like when we were first here in this country in Hawaii and I didn’t know the language. I didn’t know anything.

My mother was just working hard at every low-paying job. She would go to work early in the morning and she would come home late at night. And my brother and I would go to the bus stop and wait for her to get off that bus.

So I started thinking about what it would have been like if my mother had been taken away from us. I don’t know what would have happened to us. It would not have been good. I would have been devastated. This is what’s happening to these kids.

I think part of what happens with the Republicans, too many of them, is that they lack an ability to put themselves in somebody else’s shoes to allow that empathy to guide their decisions and their positions.

Leader Pelosi. It’s morning. I’m not saying good morning, because it’s not a good morning because of what is going on on the Floor of the House today.

But just before we get to that, I just wanted to remind you that this week the Republicans are observing the six months since they passed their odious tax bill, mortgaging the future of our children, seniors, working families to hand tax breaks to the wealthiest 1 percent in our country and to corporate America.

It is amazing to think that we go deeply into debt, over $2 trillion in debt, in order to give a tax break to corporations with a benefit to ship jobs overseas.

About 83 percent of the benefits go to the top 1 percent in our population. It’s so unfair. It’s called a middle income tax cut and yet 86 million American families, middle class families, will pay more taxes under the life of this bill.

Here they are laughing it off at the White House six months and one day ago. They’re laughing off the harm that they’re doing to children born with a physical disability, to families, over 125 million of them in America, which have a person with a pre-existing condition.

What will that do? Increase cost, make acquiring insurance almost impossible, returning to a time when insurance companies can discriminate against people with asthma, diabetes, cancer, heart disease, arthritis, mental health, or substance abuse issues, you name it.

A little child born with a birth defect or a heart challenge for a lifetime will have a pre-existing medical condition, and the Republicans think it’s funny that they are going to remove that benefit from the health care.

It’s a stunning thing. It’s important for people to note what the horrible policy that they are putting forth means in their lives. And this is about their health and their economic, financial security.

Again, make no mistake, they are trying to use the courts to do what the American people resoundingly oppose, and this government will not even protect the law of the land.

Meanwhile, the Republicans continue, the Republicans on the House Floor continue to be complicit in the President’s atrocities, the anti‑family bills. Don’t take it from me. The Conference of Catholic Bishops says that these bills ‘perpetuate child detention and undermine existing protections relating to such detention.’

The GOP should abandon these bills immediately and demand the President rescind his cruel policies at the border, policies he created and that he can fix, and not with that halfway measure yesterday. Democrats will continue to protect Dreamers and will keep families together, respecting America’s heritage and our future.

So here it is. It’s just a stunning thing. I know that many of you may not be parents – maybe all of you are – but all of you are children, and you must remember the comfort of home, of having your parent be there for you.

I have five children and it took me years before I was not in the night running down the hall hearing a sound of somebody maybe needing attention in the middle of the night.

They were on a path, according to HHS, to have 30,000 such children by August. While that may not still be the case in terms of the present conditions under which they are held, it certainly will be still the situation when he talks about zero tolerance, charging people applying for [asylum] and whether the children are incarcerated with their families or not. They should not be incarcerated; they’re children.

The American Academy of Pediatrics has said that – they have warned that family detention poses serious dangers to children’s health and can result in lifelong consequences for educational achievement, economic productivity, health status, and longevity.

Simply, children do not belong in an immigration jail, that’s just the way it is – or in detention on military bases, is what they have in mind now.

So with that, we say that this is a raw deal for the American people. In fact, today is our Tweet Day on pre-existing medical conditions, preserving them. We have a tweet storm going on in that regard.

At the same time, this President is engaged in his tweets. What’s he saying now? Something so ridiculous. He thinks that the way you protect the border is to put children in cages.

More links from a busy week related to immigration:

Washington, D.C. – House Democratic Leader Nancy Pelosi joined her fellow House Democrats for a press event to call for passage of the Keep Families Together Act, legislation to end the Trump Administration’s cruel policy of separating families at the border. This bill already has more than 190 House Democratic cosponsors and is the House companion to the legislation introduced by Senate Judiciary Committee Ranking Member Dianne Feinstein (D-CA) earlier this month.

Remarks at the link.

A shadow hearing was held on the family separation crisis.

HuffPo: Pelosi On Trump’s Separation Of Migrant Kids: ‘Come Near Our Cubs, You Got A Problem’

Democratic lawmakers gathered Thursday to discuss the Trump administration’s zero tolerance policy toward immigrants crossing the border illegally, which has led to officials separating over 2,300 immigrant kids from their parents.

“You come near our cubs, you got a problem. And we consider these [immigrant] children our children,” House Minority Leader Nancy Pelosi said at the “shadow” hearing ― one held outside the formal committee process. During the hearing, lawmakers questioned experts from child health and immigration advocacy groups about the consequences of Trump’s zero tolerance policy, and its resulting separations and detentions of migrant kids and parents.

“You cannot do harm to these children, and in the name of the United States of America,” Pelosi added, after noting she was speaking “as a mom, a mother of five children.”

“They think there’s no harm done to a child from removing them from the arms of a parent, all the psychological and emotional scarring,” she continued. “We demand to know what they’re doing to unite these families, to end the zero tolerance policy.”

In other House news:

6 Months Since Passage, GOP Tax Scam for the Rich is Getting Even More Unpopular

Contrary to what the Speaker believes, the GOP Tax Scam for the rich is actually becoming less and less popular by the day, six months since it passed the House. And that’s because the tax scam adds $2 trillion to the deficit, ransacks the future of our children to hand massive handouts to big corporations and the wealthiest 1 percent and sells out Medicare, Medicaid and the middle class.

Below are articles that reveal the scathing reality about the GOP Tax Scam, more than 180 days after its passage.
[links embedded]

Perceptions of the tax law aren’t positive even in Republican-dominated states — a Quinnipiac poll of Texas voters taken in April found that 45 percent disapproved of the law.

“Today’s rule is yet another sign that Republicans will never abandon their relentless assault on Americans with pre-existing conditions. Once again, Republicans are trying to revive the monstrosity of Trumpcare’s cruelest provisions and create a dark future of free-wheeling discrimination against millions of children, parents and seniors with pre-existing conditions. The Republican agenda means surging new health costs and dismantled health protections for those who need them most.

“The American people cannot afford the Republican raw deal on health care. Democrats are working to improve and update the Affordable Care Act, reduce health costs for everyone and offer A Better Deal to lower prescription drug costs for families.”

“Nothing about the Trump Administration’s behavior indicates it has any clue how to make government run more smoothly or efficiently for the American people. The only purpose of the Administration’s reorganization is to make it easier to demonize and dismantle our investments in public education, students, teachers, workers, veterans and hungry families trying to make ends meet.

“The Trump Administration’s reckless reorganization proposal is a recipe for more bureaucratic, inefficient and unresponsive government – and sadly, that’s exactly Republicans’ purpose. The GOP wants to ensure that the federal government is less effective at protecting workers’ wages, less vigilant in guarding students’ rights, and less capable of protecting a basic standard of living for families in our country.

“At every turn, Republicans in the White House and Congress are sticking the American people with a raw deal on their health, education and economic security. Democrats will continue to fight to give the American people A Better Deal, with Better Jobs, Better Wages, Better Futures.”