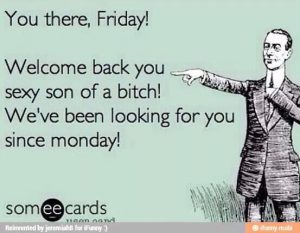 What a completely demoralizing week…but we persist. DD(DumDonnie) thinks he can shock us into giving up…He’s got another thing coming..The dipshit works for us even though he seems to think he’s boss and we work for him. Not the way it works in our democracy.

On the contrary. We very much want a floor vote. Watch what happens in the congressional polls the week after. It won't pass in the Senate. If this passes the House, I think we can pick up 40 seats. https://t.co/pbgCgZvr0g

First time illegal entry into the United States is a misdemeanor.

Lying on or omitting materially relevant information from your SF86 (as Jared Kushner did multiple times by his own admission) is a felony.

Guess which one's getting prosecuted?

While Melania wears a jacket that says "I really Don't care" the people's President @HillaryClinton raises 1.5 million dollars to help the children, because Hillary really DOES care! #StillWithHer https://t.co/6cfUd2dI1Z

I feel a little less anxious than I have these last few nights… and that’s making me anxious.

Nothing has been fixed.

There are marches planned for June 30th. There is endless hell to raise between now and then.

No rest until we have driven every last stake into this policy.

I’m not going to be here this morning as I have a doctor appointment at 8 AM so you’re on your own.