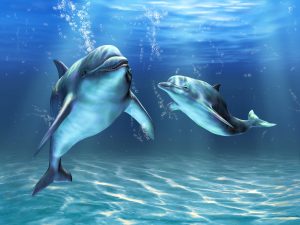 Sometimes death is merely a transformation

She was the best free diver in the world.

The diving world had held its collective breath when Nereida proved she could stay down for nine minutes with no breathing equipment other than her own lungs. She’d won competition after competition, outperforming divers half her age.

However, only a small part of that world was gathered here on this sunny July morning: three fellow divers in one boat, her twenty-year-old daughter Marissa and a couple of journalists in the second boat, and a few fans in the third. This free dive was just for fun.

“What, no lifeline?” one journalist asked.

“Not for a fun dive,” Nereida explained. “I’ll be wearing a couple of weights to take me down, but basically I’ll just be diving on one breath, to see how far down I can go.”

She was already in the water, wearing the wetsuit with the monofin to help her descent. Now she squinted in the bright sunlight as she waited for the signal to descend from her fellow diver, Nikos, and slid her goggles from the top of her head over her eyes.

The wind off the water whipped Marissa’s long blonde hair around her face as she leaned forward to call to Nereida. “Mom, after this I’ll take you out for a hamburger!”

“Thanks, darling!” Nereida called back.

She filled her lungs with air, hung the chain with the weights around her neck, and descended: down, down, down through the clear green water. As she went deeper the sunlit green changed to dark green and her body began to embrace the water rather than fighting it.

Ah, this was it! This was what she loved. Her conscious mind had known for years that it was the gas bubbles dissolving in her bloodstream that induced the feeling she was having now—a euphoria commonly called “the rapture of the deep.” The weight of the water compressed her lungs and her heart rate slowed.

But she was beyond thinking now. She was one with the water, a being in whom ancient reflexes were once more at work, for humans were creatures of the sea long before they crawled out of the sea onto land.

It was time to resurface. She reached for the weighted chain around her neck to take it off but as she raised her arms, a riptide seized the lower half of her body. Unable to battle the strong current, she succumbed to it, watching helplessly as it carried her away.

The dark green water turned black and she knew no more.

“This is a very unusual human, Sreet-Sreet.”

“You’re not kidding, Erk-Click-Click! She can stay underwater as long as we can!”

Erk-Click-Click nudged Nereida’s body with his left fin. Her monofin had become lodged in a patch of seaweed. “I think she’s dead.”

“She might not be. Why don’t we take her to the Cave and consult the Goddess?”

“No sooner said than done, Sreet-Sreet. Here, you bite this weed off her, then I’ll swim under her and take her on my back.”

In human time it was no more than half an hour’s work for the two bottlenose dolphins to convey Nereida, or possibly her corpse, to the sea cave in which Thalassa held court.

When Nereida opened her eyes she saw two kind faces smiling at her. Into her dim mind floated the idea that these were not human faces, but before she could process the thought she became aware of another Being, just beyond the two faces, who was also looking at her. The other Being seemed to be made of blue sea-water and the face, although somewhat human in that the eyes, nose, and mouth were placed in familiar positions, seemed impassive. As Nereida gazed, the two dolphins arranged themselves on either side of her, helping to stabilize her.

Language from the Other Being floated into Nereida’s mind. “Your human name means ‘sea nymph, daughter of Nereus.’”

“I am Thalassa, ancient Goddess of the primordial sea. I must tell you that in your human form you are dead. However, there is an alternative. If you choose to be reborn in dolphin form, say as…” here Thalassa’s eyes shifted to the dolphin on Nereida’s left side, “…as the calf of Sreet-Sreet, who helped rescue you, you could live another fifty years.”

“Think of it,” urged the dolphin on her right. “Diving with us, playing with us, traveling with us wherever we go—we’ll hunt for food through the seven seas, we’ll live always in the water, the cool water.”

“Very well put, Erk-Click-Click,” Sreet-Sreet said. She was euphoric: she’d been in love with Erk-Click-Click since she was a calf swimming at her mother’s side. To bear a calf of her own and swim with both of them would be joy beyond imagining.

“Yes,” Nereida thought. “Yes, I would love to live in the sea, in the beautiful cool water with my rescuers, my parents, diving and hunting and playing.”

“Very well. Your wish is granted. Swim on and live happily! I now decree that your name shall be Sreet-Click-Click.”

The cave, the Goddess, the smiling faces of her rescuers, all began to fade as Nereida lost consciousness.

“Glad,” was Nereida’s last human thought. “Glad…live in the sea.”

Eight-year-old Kailani loved three things apart from her parents: the sea, the summer, and the wide blue sky that shone down every day, or so it seemed to her.

It was summer now. Her parents had flown with her from Hawaii, where the family lived, all the way to this Greek island in the clear green Aegean sea.

“It just seems fitting to remember her last dive ten years ago,” Marissa said to her husband Merlin. “It was such a beautiful day. I remember telling her I’d take her out for a hamburger afterwards.”

She leaned back on her elbows on the blanket Merlin had spread on the strange black sand, watching as Kailani ran in and out of the waves. “Kailani loves the sea as much as her grandmother did.”

Merlin shifted position so he could look into her face. “Don’t dwell on it, darling, if it makes you unhappy.”

“I’m okay,” Marissa assured him. She smiled, but Merlin had turned to look at Kailani again as she raced along the shingle.

Marissa whipped around to watch as Kailani was carried away by the waves. “No!” she screamed. “No!”

She and Merlin both raced down to the sea, where green waves edged with white foam dashed against the shingle. “I’m going in,” Marissa yelled and made as if to plunge into the water when she felt a warm hand on her cold, goose-bumped arm.

“Look,” Merlin breathed, and the barely articulated word was filled with awe.

Kailani was no longer floating helplessly on the waves but sitting astride a dolphin who swam closer and closer to the water’s edge. Then the dolphin submerged so that Kailani could slide off its back and find her footing on the shingle. Kailani, drenched but triumphant, ran up the sand to be enfolded in her parents’ embrace.

“Mommy, Daddy, the dolphin gave me a ride!”

Marissa raised her head and looked out to sea again. The dolphin was still there, watching and seeming to smile. Marissa stared, transfixed, then the dolphin, with a flick of its tail, submerged and could be seen swimming rapidly away underwater.

Merlin lifted Kailani in his arms. “Let’s go back to the hotel and get hot drinks for all of us.”

Marissa laid her hand on his arm. “You know—you know,” she said, barely able to speak between sobs, “just for a moment the expression on that dolphin’s face reminded me of—my mother!”