The Weekly Democratic Party Address was delivered by Sen. Catherine Cortez Masto (D-NV). She reminds us that Democrats “will stand up for Medicare, Medicaid, Social Security, pre-existing condition protections, and the peace of mind America’s seniors and hardworking families deserve.”

“This week, citizens around the country are getting ready to cast their ballots in the midterm elections. And they are looking for candidates that deliver on their promises. For many families the most important promise a candidate can make is the promise to support programs that keep families healthy and protect their financial security.” 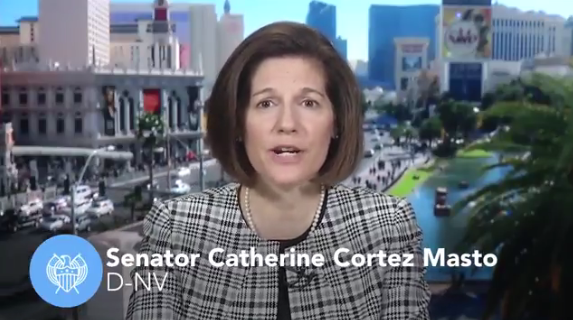 Las Vegas, Nev. – As citizens across the country are preparing to vote in the midterm elections, U.S. Senator Catherine Cortez Masto (D-Nev.) encourages Americans to make their voices heard by standing up against Republican attempts to undermine their financial security and health care. Cortez Masto calls on the Trump administration and Republican Leaders in Congress to drop their ongoing efforts to tear apart our health care system and instead work with Democrats to protect programs like Medicaid, Medicare, and Social Security, and to ensure all Americans have access to affordable, quality health care that doesn’t discriminate based on pre-existing conditions.

“Hi, I’m Senator Catherine Cortez Masto, and I have the honor of representing the Great State of Nevada in the U.S. Senate.

“This week, citizens around the country are getting ready to cast their ballots in the midterm elections. And they are looking for candidates that deliver on their promises. For many families in my home state, and across the country, one of the most important promises a candidate can make is the promise to support programs that keep families healthy and protect their financial security.

“During the 2016 election, President Donald Trump promised not to cut Medicare or Social Security, programs that help millions of Americans afford healthcare and retire with dignity. Yet, when numerous nonpartisan research groups found that Trump’s tax plan would balloon the deficit and give the GOP an excuse to propose severe cuts to vital health care and retirement programs, Congressional Republicans like Mitch McConnell promised that wasn’t the case. The tax cuts, they said, would “pay for themselves”.

“Last week, the Congressional Budget Office reported that the U.S. budget deficit grew to $779 billion in 2018. This 17% increase was caused in part by the GOP’s tax plan, which gave away billions of dollars in tax breaks to the wealthiest individuals and big corporations, while doing little for the hard working families it promised to help.

“And now, to pay for their tax cuts, GOP leadership is beginning their attacks on critical programs for seniors and hardworking families in Nevada, and throughout America, by saying that Congress needs to look at the costs of these programs.

“This is nothing more than a veiled threat to target cuts to Medicare, Medicaid and Social Security to pay for their lavish corporate giveaway.

“Medicare, Medicaid and Social Security have lifted hundreds of millions of vulnerable Americans out of poverty. I’ve seen firsthand the lifeline these programs provide to seniors like my grandmother, who worked as a sales clerk in Las Vegas to provide for her family and had Medicare and Social Security to rely on in her retirement.

“These programs provide hundreds of millions of families like mine with dignity, security, and peace of mind. Every working American has paid into Medicare and Social Security with the promise that one day those investments would ensure they could maintain a healthy standard of living into their golden years.

“We cannot allow Republicans to use their reckless corporate giveaway as an excuse to go after programs middle and working class families rightfully depend on.

“On the campaign trail, President Donald Trump and GOP candidates also promised to improve access to health care for those in need. Yet, despite two failed attempts to push health care repeal through Congress, after more than 20 million Americans gained insurance coverage over the past eight years, Senator Mitch McConnell doubled down last week. He stated in an interview that Senate Republicans are revisiting health care repeal if they have the votes in the next Congressional session.

“Even without the votes in the Senate, President Trump and the GOP have already taken steps to sabotage our health care system by eliminating the coverage requirement and threatening protections for people with pre-existing conditions.

“Already in states all across the country, it’s apparent that many families are paying more for health care than they would were it not for these Trump-GOP sabotage actions.

“These plans don’t even include protections for people with pre-existing conditions. Two weeks ago, in a profound disservice to families and communities across the country, the Senate failed – by one vote – to overturn Trump’s order.

“On top of this, Leader McConnell recently doubled down on his support for a lawsuit from Republican state attorneys general and the Trump administration, which if successful, could result in the eradication of pre-existing condition protections overnight.

“We cannot send Americans back to the days when patients with pre-existing conditions were denied coverage, or where insurance companies weren’t required to cover basic services like maternity care.

“We cannot allow Senate Republicans to rip away health care from millions of Americans including over 328,000 in the State of Nevada.

“I’m proud of what my Democratic colleagues and I are fighting for in the Senate, but we can’t do it alone.

“Now, Americans have the opportunity to make their voices heard again by heading to the polls this November. Too much is at stake to sit on the sidelines.

Congress is in recess until after the mid-term elections so there are no leadership news conferences scheduled.

Washington, D.C. – Democratic Leader Nancy Pelosi released this statement on President Trump’s announcement on Medicare Part B drug prices, while continuing not to demand lower prices for seniors with Medicare Part D, which is 3.5 times larger:

“After nearly two years of spitefully acting to raise American’s health costs, slash Medicare and Medicaid, and destroy protections for people with pre-existing conditions, it is hard to take President Trump seriously on prescription drug prices with this proposal just 12 days from the election.

“Unless there is a Democratic Congress to back the real, tough legislative authority needed to lower prescription drug prices, the President’s newfound interest will disappear just like the rest of his broken promises – same as his phantom infrastructure bill, same as his promise not to cut Medicare and Medicaid, same as his promise to protect people with pre-existing conditions. Even now, President Trump is still refusing to negotiate the Medicare Part D drug prices which are crushing our seniors.

“Instead of lowering drug prices, Republicans used their two years with complete control of Washington to try to destroy protections for pre-existing conditions and hand massive tax windfalls to Big Pharma with their GOP tax scam for the rich. Democrats have made real action to lower prescription drug prices a top legislative priority of our For The People agenda, and that is what a Democratic Majority will deliver.”

“This weekend, our nation celebrates 9 years since we passed the Matthew Shepard and James Byrd, Jr. Hate Crimes Prevention Act, expanding critical hate crimes protections to include gender, sexual orientation, gender identity and disability, and fulfilling our responsibility to pursue freedom, equality and justice for all Americans. Today, 20 years since Matthew Shepard’s murder, we feel especially close to his memory as he is interred in honor at the National Cathedral in Washington.

“Sadly, countless vulnerable Americans are faced with continued threats from a destructive GOP assault on our nation’s most cherished values. From undermining voting rights to fearmongering about immigrants to attacking the rights of women, LGBTQ Americans and transgender servicemembers, the Trump Administration has used their discriminatory agenda to sow the seeds of discord and hate for partisan political gain. Most recently, reports that the Trump Administration is considering excluding transgender people from its legal definition of gender is a monstrous attempt to erase 1.4 million proud, courageous Americans because of who they are. The Administration’s appalling actions and encouragement of angry, divisive rhetoric dishonors our duty to ensure all Americans are treated with the dignity and respect they deserve.

“Democrats will always stand up and speak out against the GOP’s hateful policies. We will make passing the Equality Act a top priority to remove all doubt that sexual orientation and gender identity belong in the vital protections of the Civil Rights Act. Together, we will continue to celebrate and take pride in our nation’s beautiful diversity as we fight For The People by lowering health costs and prescription drug prices, raising wages by rebuilding America’s infrastructure, and cleaning up corruption to make Washington work for everyone.”

3 comments for “Fighting Back: “Democrats will stand up for Medicare, Medicaid, and Social Security””