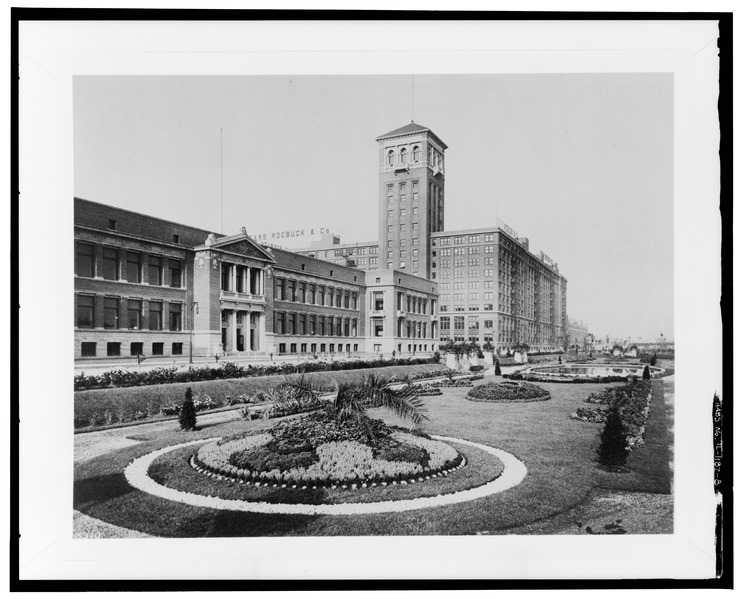 I am a firm believer that too many history textbooks focus on dates and Big Events like wars, while giving scant coverage to the daily lives of the people who are living in and through those times. I was reminded of this while I was on my recent vacation; I picked up a reproduction of the 1908 Sears, Roebuck catalogue and have since spent more time than I care to admit reading the listings. I bought it as a resource for theatre costuming and props, but today I’m using it as a resource for connecting dates and big and small events with the people who lived in 1908.
For rural Americans especially, the Sears, Roebuck catalogue was the great equalizer. According to the catalogue, “nearly one-half of all the families in the United States, outside of the larger cities have sent to us for goods.” Although paved roads were years away; indoor plumbing was going to be the exception rather than the rule for decades to come; and even electricity was a marvel and a luxury, the range of goods in the catalogue opened up worlds previously unavailable to rural Americans. For city-dwellers, the catalogue did the same and also provided glimpses of life in the upper class, copied and priced down for the middle class. The last Big Book was published by Sears in 1993, and now Sears itself has declared bankruptcy. But no history of the U.S. and its people will ever be complete without recognizing the impact of the Sears, Roebuck catalogue.

On the morning of April 18, 1906, a massive earthquake shook San Francisco, California. Though the quake lasted less than a minute, its immediate impact was disastrous. The earthquake also ignited several fires around the city that burned for three days and destroyed nearly 500 city blocks. (San Francisco Earthquake, 1906)

By the 1908 catalogue, the curious Sears customer could buy both a stereoscope (if they didn’t have one already)` and a series of pictures detailing the story of the earthquake. The standard stereoscope cost 28 cents ($7.44 today) or $3.25 per dozen.

The lenses are large, measuring 1 3/16 by 1 3/8 inches; specially ground from a fine quality of pure, clear, optical glass accurately adjusted and firmly mounted. The frame is made from selected hardwood; the lens board composed of five pieces carefully mortised together to prevent warping, and the hood is of three-ply hardwood veneer, nicely finished and varnished. (p. 178)

To accompany your stereoscope, was the San Francisco Earthquake series of photos, documenting “the story, the havoc of death, the ruins of a great city, fleeing refugees”:

October 9, 1908 – The U.S. Bureau of Public Roads completes an initial two mile macadam surface through Cumberland Gap with the Object Lesson Road, one of the first efforts to test a hardened road. (1908 Timeline)

The Model T made its debut in 1908, but buggies and carriages were still the order of the day in the Sears catalogue. There was even a specialized vehicle department, Department 11, with its own catalogue.

…if you, before purchasing, would like to see all of these jobs illustrated and described on good paper, in a handsomely bound catalogue with large illustrations, complete detail description, send for our Department 11 Catalogue. In a letter, on a postal, or even an order for goods, say, “Send your Department 11 Catalogue,” and we will send you by return mail, postpaid, one of the handsomest vehicle catalogues ever published. (p. 92)

A roundabout, similar to the one pictured below, could be purchased for about $44 (about $1169 today). 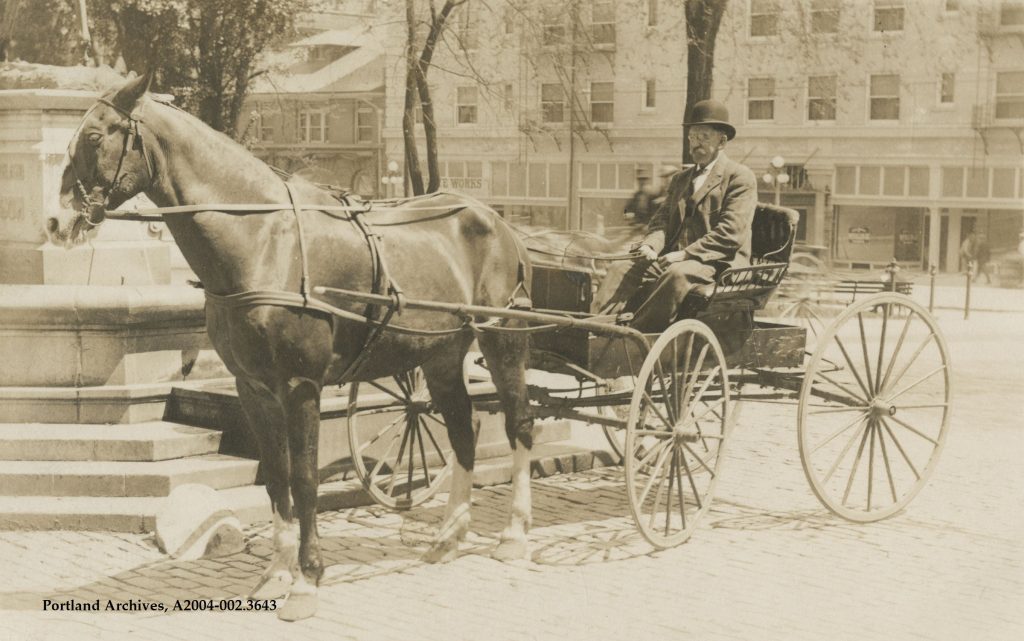 A man in a carriage next to Thompson Fountain (Elk Fountain), circa 1908. (Portland, OR)

For those looking for self-powered transportation, one could buy a bicycle; not just any bicycle, but the [self-described] “Famous Red Head Elgin King” for $14.95 ($397.26 today). Sears was not shy in its copy about this bike.

The Advance 1908 Model Elgin King, as illustrated, is probably the best known bicycle on the market today. It is not only widely know, but also very favorably known. It is a bicycle which we have manufactured continuously for a great many years, and there is hardly a town or hamlet in the United States where the Elgin King bicycle with its characteristic red head and red center tube is not in use today and known to bicycle riders. Before we controlled this bicycle and manufactured it in our factory with our improved facilities, it was sold for $125.00. add yet the original Elgin King bicycle that sold for $125.00 is not to be compared with our famous Elgin King, which we sell today for $14.95. The Elgin King is a better wheel today because important improvements have been embodied in its construction, and we have kept it thoroughly up to and in fact ahead of the times. (p. 163)

Apparently in 1908, Sears did offer a motorized buggy, but I have yet to find it in the 1184 page catalogue I have. This video, however, provides a glimpse and some interesting details:

By the 1850s indoor plumbing was starting to be installed for the wealthy. However the principals of venting still weren’t understood. There were many unpleasant back-pressure events. Double doors were common between add-on bathrooms and the main living areas to prevent sewer odors from entering the living space. In the 1860s the water supplies for multistory tenements were hydrants in the yard, while sanitation was accomplished with privies over waterproof vaults in the back yard. (George, 2001) …At the same time water heating was developing to the point where hot piped water became common. In the 1870s coils to heat water were added to the back of coal-burning cooking stoves. The advent of gas utility services in large cities in the 1890s and 1900s led to automatic water heaters and plumbed hot water. Temperature and pressure relief valves were added later to prevent spectacular, unfortunate accidents. (George, 2001; Watts Regulator Co, 1940). …In 1920 only 1% of U.S. homes had electricity and indoor plumbing. (Lest We Forget, a Short History of Housing in the United States)

Indoor bathrooms in 1908 were for the wealthy and upper middle class, but Sears as a Wishbook was already starting. For about the same price as a simple buggy ($43.80 for a three-piece bathroom vs. $43.95 for a roundabout), and if one had a dedicated room, plumbing, and sewer connections, a “closet” (toilet), “lavatory” (sink), and bathtub could be purchased. The toilet tank was made of “…polished golden oak, thoroughly seasoned and highly polished. It has a capacity of 6 1/2 gallons, which is sufficient to cause a positive and powerful flush. It is lined with copper, all fittings and trimmings are made of heavy brass…” The seat was also made of golden oak. (p. 604) The complete bathroom outfit had a shipping weight of 480 pounds. Worth noting is the shipping note that the toilet was shipped from Chicago, while the bathtub (5′ cast iron clawfoot) and sink were shipped from “our factory in Southeastern Wisconsin.” For those wondering, it seems highly likely that the tubs and sinks were Kohler products.

For those with more modest aspirations, elegant dining was available with the purchase of a 56-, 80-, 100-, or 101-piece dinner set for $5.85 ($155.45 today) to $10.30 ($276.09). (In an era when the average worker made between $200-400 per year, this is still Wishbook territory; for a white-collar professional like an accountant who might make $2000 per year, it was a bit less of a stretch.) For an additional $1.75, one could order a dozen coffee cups and saucers to go along with the dinner set; the dinner sets only came with tea cups and saucers. This particular set, Imperial Faience, was made of semi-vitreous china, with a pink rose decoration, full [coin] gold trim, and scalloped edges with lace embossing. Each set was shipped from “our warehouse in East Liverpool, OH” which not-so-coincidentally is the home of Homer Laughlin China Company (best known for their Fiestaware). Today, Imperial Faience dishes with the Sears design are difficult to find; it appears Homer Laughlin made the same dishes under their own name but without the embossed lace edges or the gold trim. A current eBay offering can be found here: Juice pitcher

The 2010 Census found that 80.7 percent of the country lives in urban areas, but 100 years earlier, more people lived in rural areas: 54.4 percent. Life in the U.S. has changed dramatically…

If you were one of those kids who pored over the pages of the Sears Christmas Wishbook, using it to compile your list for Santa, the 1908 catalogue is sure to be a disappointment. There are only three pages of toys; two of dolls and teddy bears and one best described as miscellany: poker chips, playing cards, tea sets, and a “Young Folks’ Scroll Saw Set.” (I give them credit for urging boys and girls to learn to use this “useful, instructing and interesting device.”)

However, if you need a harrow, plow, manure spreader, cultivator, or stump puller, you have seven pages to look through; guns, revolvers, and ammunition requires wading through 45 pages; three pages for telephones (only 8% of Americans had phones in 1908); and pages upon pages of saddles, bridles, bits, buggy whips, harnesses, and tools that look vaguely medieval but are apparently related to horse grooming. I strongly suspect these pages are greatly reduced in number by 1912 and are probably not early in the catalogue like they are in 1908. I also suspect the two pages of gas ranges vs the 12 pages of wood and coal burning stoves start flipping in numbers within a decade. But if anyone can find me an Acme Charm stove for $15.95 (Pictured and described here) and sans asbestos, please, I certainly won’t object.

I could go on and on (because really, that’s what I do), but I’m going to end it here today. If anyone has any specific items they’d like me to look up, feel free to ask in the comments. And I may do this again sometime…I have a 1929 catalogue headed my way soon.

Special addendum for Diana in NoVa, who had questions about my furniture restoring escapades:

Step 1: Table after cleaning with TSP.

Step 2: Table after Restor-a-Finish is applied; you can see from the bottom right corner of the photo that not all of the damage to the veneer is hidden.

Step 3: Table after Feed-N-Wax is liberally applied. In retrospect, I probably should have used dark walnut, rather than mahogany, Restor, but it will do for now.