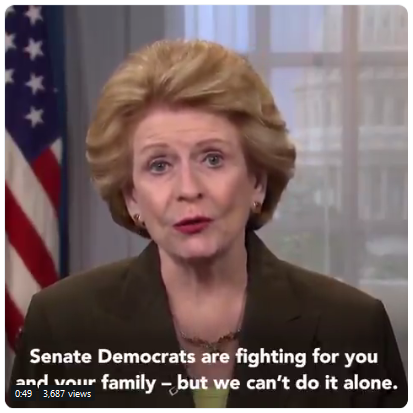 There was no transcript provided but the CSPAN video contains closed captioning: CSPAN for Senate Democrats is usually available later in the afternoon on Saturday.

As we go into Memorial Day Weekend, which is such a beautiful time for us to remember, respect, and honor – we honor the service and sacrifice of our heroes in uniform and reaffirm our sacred duty to never forget those who made the ultimate sacrifice for our country.

The service of our veterans reminds us of our mission to build a future worthy of their sacrifice. We do so honoring the oath we take to support and defend the Constitution and to protect the American people.

Honoring that oath, this week, the House passed nine bills to support veterans, protecting their health benefits, financial security, and taking action to end the crisis of veteran suicide.

It is unacceptable that surviving children of our fallen heroes, who have suffered so much, are now forced to pay thousands of additional dollars in taxes on their benefits. They cannot be forced to sacrifice twice.

As Democrats take action to protect military families, we also are hard at work to protect our workers, in stark contrast to the Republicans’ special interest agenda.

Today, in the same legislation that contains the ‘Kiddie Tax’ Act, or tax fix, to fix what the Republicans did in their tax scam, we’re passing the SECURE Act. We’re passing strong measures to help workers have a secure retirement.

Also, to honor our oath, we’re hoping to have a disaster supplemental bill passed before we leave for the district work period. That was our hope. That’s what we’ve been working on till the wee small hours of the night last night.

However, we have sent legislation, bipartisan legislation passed in the House, to the Senate. It would be helpful for those in the disaster stricken areas if the Senate would just pass the bill – bills – and send it on to the President.

We passed a bill a while back, months ago, and then in light of other disasters that occurred in the spring, we then, May 10, passed another bill that expanded the areas that were affected. That’s sitting over at the Senate. They could well just pass it and send it to the President.

That would send such a beautiful message to those areas that are affected and continue to be affected. You see what’s happening in Missouri as we with gather here.

What the problem is, is that the Trump Administration has put in conditions for border funding that are just totally unacceptable, really don’t have anything to do with what we’re trying to do for disaster assistance, and we have not been able to find common ground. We understand our responsibility to protect our border, but what they are doing is just not right.

Yesterday’s Deutsche Bank ruling concluded, and I quote: ‘Put simply, the power of Congress to conduct investigations is inherent in the legislative process.’

And in the Mazars case, that would be on Monday, the judge declared: ‘There can be little doubt that Congress’s interest in the accuracy of the President’s financial disclosures falls within the legislative sphere.’

But the President’s priority is his personal and political interest, not the public interest.

Yesterday, as you know, Democrats went to the White House prepared to offer the President the opportunity to launch an historic infrastructure initiative. We had met three weeks before. The idea that we – and it was a good positive meeting about how we’d build the infrastructure of our country – roads; bridges; mass transit; broadband in rural areas, and in underserved urban areas as well; water systems, both wastewater and safe, clean drinking water, infrastructure for our satellites so that our technology works here.

For all of these things, we were optimistic. We also were hoping for housing and school construction as a further part of the conversation.

Well, everyone, he started making, sending signals that he may not be – he might not be ready or interested. The night before, he sent us a letter, to Chuck Schumer and to me, saying that he doesn’t want to do infrastructure until we do the U.S.-Mexico-Canada – that’s not the accurate – some people call it AFTA, NAFTA, some call it NAFTA 2.0. But anyway, that trade agreement. And that was a strange juxtaposition. But nonetheless, the next day you know what happened.

I think what happened, he says it’s because of cover-up, and I know that that strikes a chord with him and he’s afraid of cover-up – afraid of being accused of cover-up. But I really think that what – he knew the one court decision was getting into territory that he did not want touched, and they did not allow the Mueller investigation to go into the President’s personal finances.

So, Mazars was a setback for him, and then he must have known the Deutsche Bank decision would be consistent. But in any event, to inoculate against its presentation, he pulled a stunt.

Now, I truly believe that the President has a bag of tricks, and the White House has a bag of tricks, that they save for certain occasions. They don’t necessarily apply to the occasion, but they’re a distraction, which is – he’s a master of distraction. We will all agree on that. That’s something he does well. To distract from problems that he has, he changes – tries to change the subject.

And while he tried to say it’s because I said cover-up, we’ve been saying cover-up for a while. And our 9 o’clock meeting was a meeting we have anyway. So, it had nothing to do with him.

But, I think what really got to him was these court cases and the fact that the House Democratic Caucus is not on a path to impeachment, and that’s where he wants us to be. And when he saw that that was not happening, that, again, with the cover-up, which he understands is true, just struck a chord.

So, it was really sad, because as I said to some of you yesterday, Thomas Jefferson, one of our—you know, our third President, had the first infrastructure initiative. He tasked [Albert] Gallatin, who was his Secretary of the Treasury.

And I said that to the Secretary of the Treasury yesterday after the President left the room that he tasked his Secretary of the Treasury to put together a big infrastructure plan, to follow the Lewis and Clark Expedition, the Louisiana Purchase, to build into the infrastructure of America, Cumberland Road, Erie Canal, things like that, that are so important to our country in terms of commerce and mobility and the rest.

Later in the century, President Eisenhower put forth an Interstate Highway proposal. It was very bipartisan. The leader in the Senate was Lyndon Johnson, in the House Sam Rayburn, and the President of the United States, a Republican President, Eisenhower, working together to pass that for the good of the country. And its purpose under President Eisenhower was that it would unify America. It was a defense issue.

So, what we’re talking about now, infrastructure, the President says ‘I’ word. I thought he was talking about infrastructure, roads, bridges, mass transit. I said some of these things already. And I thought we could give him the opportunity to make an historic contribution to the safety, because it’s a safety measure, it’s about commerce, it’s about safety, it’s about mobility, product to market, and the rest. It’s about clean air, clean water. It’s about a better future for our country.

Much needed billions, trillions of dollars in deficit in terms of low or no maintenance that we haven’t afforded. It’s never been partisan. We don’t want it to be partisan now.

But I can only think that he wasn’t up to the task of figuring out the difficult choices of how to cover the cost of the important infrastructure legislation that we had talked about 3 weeks before.

But the President, again, stormed out. And I think, what, first, pound the table, walk out the door. What? [Before], have the TV cameras in there while I have my say. That didn’t work for him either. And now this time, another temper tantrum.

Again, I pray for the President of the United States. I wish that his family or his Administration or his staff would have an intervention for the good of the country.

Earlier today, Democratic leaders in the House and Senate went to the White House to follow up on our meeting on infrastructure three weeks ago. In that meeting, we were pleased to hear the President agree to a $2 trillion plan with an 80/20 funding split to rebuild America’s infrastructure, and agree to provide his ideas for pay-fors in the meeting scheduled for today.

We wanted to give the President the opportunity to launch an historic infrastructure initiative that could stand in the pantheon of American history alongside the bold initiatives of Presidents Thomas Jefferson, Theodore Roosevelt, and Dwight Eisenhower. There were those who said that we should not work with the President, but we believe that we must be For The People and create good-paying jobs for American workers. Democrats are here for the country. Sadly, the only job the President seems to be concerned with is his own. He threatened to stop working with Democrats on all legislation unless we end oversight of his Administration and he had a temper tantrum for us all to see.

Democrats remain committed to an historic infrastructure package that is big, bold and bipartisan; green, future-focused and comprehensive; and jobs-creating. Our outstanding Committee Chairs will continue to work relentlessly on bold, transformative infrastructure solutions that will create good-paying jobs, regardless of the President’s behavior.

Thank you for your leadership For The People.

Washington, D.C. – Speaker Nancy Pelosi released the following statement after the Trump Administration advanced an HHS proposed rule that would end anti-discrimination protections for women and transgender Americans in health care, days after announcing a proposed rule at HUD that would strip protections for transgender Americans at homeless shelters:

“The Trump Administration’s actions show utter contempt for the health, safety and humanity of women and transgender Americans.

“According to the Trump Administration’s devastating decision to throw open the doors to sex discrimination, women could even be denied basic health care because of their reproductive decisions and history. By rolling back critical protections against discrimination in homeless shelters and the health care system, the Trump Administration is endangering transgender people at some of the most vulnerable and life-threatening moments of their lives. The Administration must reverse these dangerous rules before people get hurt or lose their lives.

“All Americans, regardless of who they are, deserve respect and access to care and support when they are most in need.”