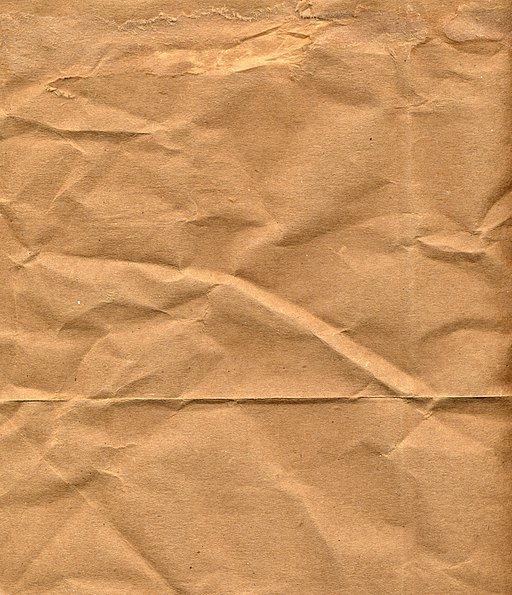 Sometimes a peripheral observation in a book sets off a series of musings and memories. The paragraph that started this train of thought:

The development of the first practical mass-produced paper bags was spurred, like so many other things, by the Civil War, as northern mill operators sought a replacement for cotton sacks. In 1870 the mechanical process to stamp out today’s familiar bag was patented, and the relationship between consumers and products began to change forever. Purchasers had been taking their own containers to grocers in in order to carry products home and thus were constrained from buying more of an item then they had planned, on impulse; the arrival of cheap, mass-produced paper bags allowed buyers to carry home as much as they wanted of what they saw in the store. (Manring, M.M., Slave in a Box: The Strange Career of Aunt Jemima, University Press of Virginia, 1998, pp. 62-63)

This post is 50% nostalgia (and perhaps confirmation that I am an Official Old), but the other 50% is presenting the question (with no answers provided), “Would reclaiming some of the past be better for our future?” for your consideration.
The story of the paper bag is pretty interesting. In the 1850s, a man named Francis Wolle invented a machine which did the cutting and pasting necessary to create a paper bag. His invention made envelope-style bags, which were useful but had limited utility. Margaret Knight, an employee of the Columbia Paper Bag Company, heard of efforts to design the equipment for a flat-bottom paper bag. On her own time and with her own money, she started the process of designing a machine, first as a wood prototype and then commissioning an iron version. In 1870, she applied for a patent…and was turned down because the exact same machine had already been granted a patent. Despite the staggering expense, Knight hired a top-drawer patent attorney to fight for her invention and against the man who had tried to steal her claim. She was able to provide ample documentation, while the fraudster’s argument boiled down to, “There’s no way a woman could have designed a machine this complex.” Fortunately for Knight, the commissioner of patents was able to point to a recent Supreme Court decision (Seymour vs. Osborne), which stated,

Original and first inventors are entitled to the benefit of their inventions if they reduce the same to practice and reasonably comply with the requirements of the patent law in procuring letters-patent for the protection of their exclusive rights. Crude and imperfect experiments are not sufficient to confer a right to a patent but in order to constitute an invention the party must have proceeded so far as to have reduced his idea to practice and embodied it in some distinct form.

Knight’s ability to prove the existence and dates for her wooden and iron prototypes, which preceded the application for the patent by the fraud, ensured that she won her case and was awarded her patent. Although improvements to the paper bag were made in later years (in 1883, Charles Stillwell was given a patent for a bag with pleated sides, which made folding the bag easier), it was Knight’s design which prompted a whole new manner of consumer shopping…and spending.

The paper bag, of course, is making a bit of a comeback as the downsides of the difficult-to-recycle plastic bag are becoming more evident. At least at my grocery store, I can now reliably count on being able to use paper if I forget my own bags, even if I can’t count on being asked, “Paper or plastic?” This is a reversal from just a few years ago when a request for paper would lead to a mad scramble to search for the hidden stash of paper bags. Thinking about the lowly paper bag led me to consider other staples of shopping, once taken for granted, but no longer readily available. 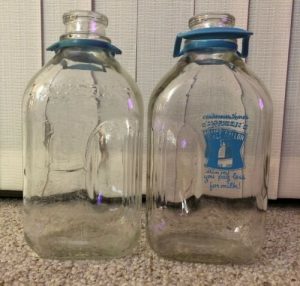 Lawson’s one-gallon milk bottles; I can still hear the sound made when they clanged against one another…but never broke 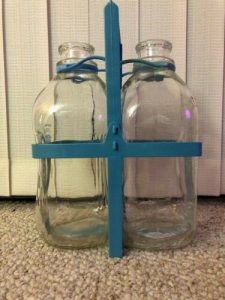 The plastic carrier was a later innovation, but we stuck with our tried and true metal carrier.

The returnable milk bottle/dairy store
Although our house had a milk box, there was no milk delivery in my town when I was growing up. I knew what a milkman was, because my grandmothers both had milk delivery, but in my town, we had to go to the dairy store to get our milk. The Lawson’s was where you walked in and picked up your milk; most of us had a company-provided carrier for the bottles. When the bottles were empty, you put them in the metal (later plastic) carrier, returned them to the store, and bought new bottles. Over the years, Lawson’s expanded beyond dairy products and became what was essentially the early version of a convenience store. Lawson’s no longer exists in Ohio, although surprisingly, it lives on in Japan: How a small dairy store from Ohio became one of the biggest names in the Japanese convenience store industry . I wonder though…is there a business model that would make reusable glass milk bottles viable again? Would it reduce the carbon footprint of the dairy industry? Did dairies move away from glass solely because of the economics of cheaper plastic, or were there other reasons? 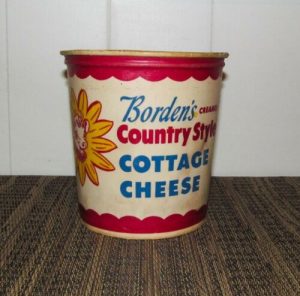 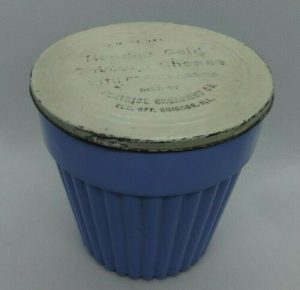 Hazel Atlas glass cottage cheese container; was it sold in stores this way?

My childhood was solidly middle-class, but it was never indulgent. My sister and I somehow knew better than to ask for too much, trusting that our parents would do their best and even provide surprise extras when they could. But I will never forget one particular trip to the grocery store when, for whatever reason, my sister and I waged a campaign with Mom to let us pick out one item that wasn’t on the list. I have no idea what possessed us; badgering Mom at the grocery store was NOT DONE. Other kids might whine or have tantrums or carry on at the store, but we knew that any such behavior would not end well. But on this particular day, we threw caution to the wind, and to our amazement, Mom agreed to our request. I will never forget Mom’s look of astonishment when we returned to her side, bearing our triumphant indulgences for the cart: my sister’s jar of bread and butter pickles (“because they’re like the one’s Grandma makes, but we only ever have dill”) and my container of large curd cottage cheese (“because you have a can of pineapple in the cupboard and instead of making upside down cake, maybe we can have the pineapple with this?”). As strong as that memory is, I have no recollection as to when cottage cheese packaging changed to plastic. In fact, I had totally forgotten that cottage cheese once came in a cardboard container. Was waxed cardboard too expensive? Did it not preserve the cottage cheese as well as the plastic? Was the move to plastic just about the cheaper cost? And then, when I was searching the internet for a picture of a waxed cardboard container, I started seeing photos of glass containers with tin lids, presumably from the 1930s or so. Was cottage cheese sold this way? If so, were the glass containers returned to the milkman in the same way my childhood milk bottles were returned to the dairy store?

I’m sure I’ve forgotten more changes than I’m remembering. What did I miss? Are there other ideas from the past that could be reexamined for updating and use today?