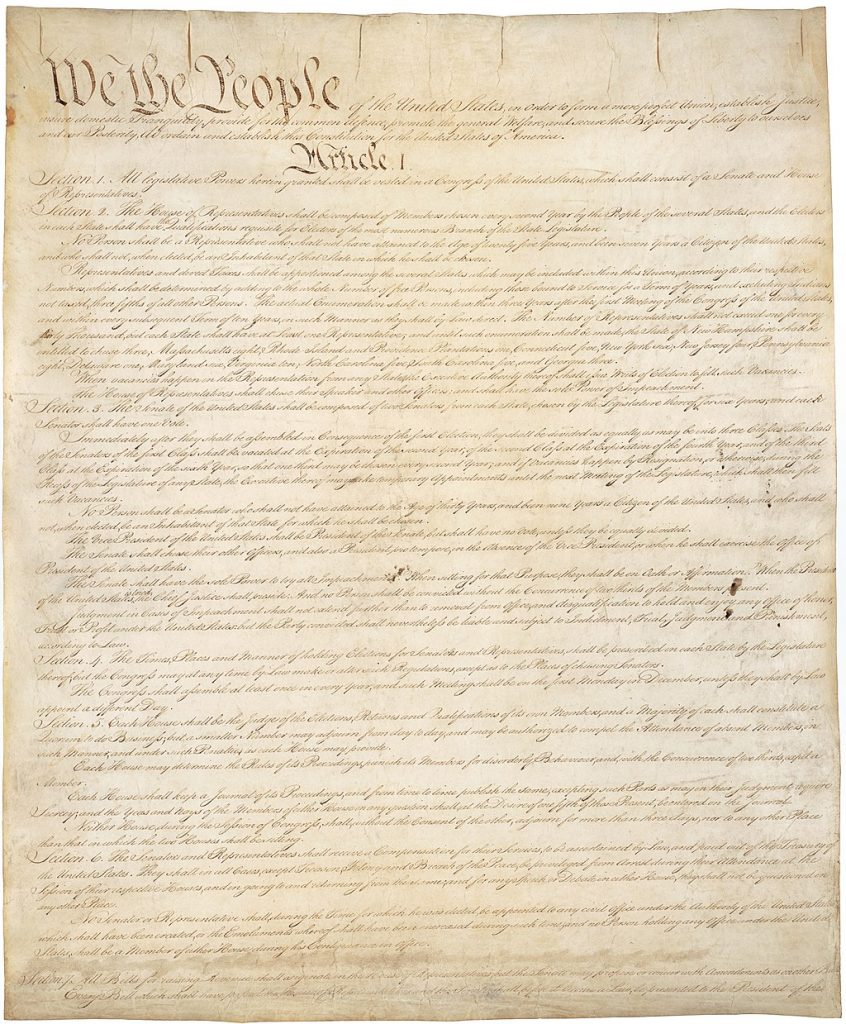 Article 1, Section 2, Clause 3: Personhood restrictions, exclusion of women and “Indians”…it’s all right there.

I think we all realize at this point that the phrase, “This is not who we are!” is more a statement of wishful thinking than objective reality. It’s a statement of privilege for those who have never had to confront oppression before; it’s a statement of disappointment for those who have been taught and believed in American exceptionalism; it’s even occasionally a statement of defiance from activists who are fighting for change. For the longest time, I would hear or see this phrase and react with a cynical, “It’s precisely who we are!” But time has shown me that, more often than not, the utterance of that phrase is also a turning point for an individual; it’s the point where a good many folks turn from a simplistic, disengaged understanding of issues to an attempt to understand; to change; and to engage. It’s also the point where a fair number start to recognize the truth in Dr. Maya Angelou’s words, “When someone shows you who they are, believe them the first time.” We’ve had lots of first times in this country; maybe it’s time to believe ’em.
They told us our understanding of the Declaration of Independence was wrong. There is one correct, immutable interpretation; we’re doing it wrong.

The very axioms of American politics now are, that “all men are by nature equal,” that all are inalienably “entitled to liberty and the pursuit of happiness,” and that “the only just foundation of government is in the consent of the governed.” There was a sense in which our fathers propounded these statements; but it is not the one in which they are now held by Americans…Those wise statesmen meant to teach that all men are morally equal in the sense of the Golden Rule: that while individual traits, rights, and duties vary widely in the different orders of political society, these different rights all have some moral basis; that the inferior has the same moral title (that of a common humanity and common relation to a benignant Heavenly Father) to have his rights–the rights of an inferior–duly respected, which the superior has to claim that his very different rights shall be respected… Next: when our wise fathers said that liberty is an inalienable, natural right, they meant by each one’s liberty the privilege to do such things as he, with his particular relations, ought to have a moral title to do; the particular things having righteous, natural limitations in every case, and much narrower limits in some cases than in others…By the consent of the governed our forefathers meant each Sovereign Commonwealth’s consenting to the constitution under which it should be governed: they meant it was unjust for Britain to govern America without America’s consent. Which part of the human beings living in a given American State should constitute the State potentially, the populus whose franchise it was to express the will of the commonwealth for all–that was in their eyes wholly another question; to be wisely decided in different States according to the structure which Providence had given them. (R.L. Dabney, “Women’s Rights Women” in Southern Magazine, Volume 8, 1871, pp. 324-325)

Robert Lewis Dabney was not just some random white guy in the United States of the 1870s. He was a noted Presbyterian preacher; a Confederate chaplain who also served as Stonewall Jackson’s chief of staff and later, biographer; and a Christian systematic theologian at Union Theological Seminary (Richmond, VA). Dabney was also an unrepentant racist and misogynist.

To meet the argument of these aspiring Amazons fairly, one must teach, with Moses, the Apostle Paul, John Hampden, Washington, George Mason, John C. Calhoun, and all that contemptible rabble of “old fogies,” that political society is composed of “superiors, inferiors, and equals”; that while all these bear an equitable moral relation to each other, they have very different natural rights and duties; that just government is not founded on the consent of the individuals governed, but on the ordinance of God, and hence a share in the ruling franchise is not a natural right at all, but a privilege to be bestowed according to a wise discretion on a limited class having qualification to use it for the good of the whole; that the integers out of which the State is constituted are not individuals, but families represented in their parental heads; that every human being is born under authority (parental and civic) instead of being born “free” in the licentious sense that liberty is each one’s privilege of doing what he chooses; that subordination, and not that license, is the natural state of all men; and that without such equitable distribution of different duties and rights among the classes naturally differing in condition, and subordination of some to others, and of all to the law, society is as impossible as is the existence of a house without distinction between the foundation-stone and the cap-stones. (Ibid. pp 326-327)

“Women’s Rights Women” by Dabney isn’t just a screed against women’s equality. It’s a defense of a hierarchical society (with white men at the top, of course). It’s a condemnation of Northern Radicalism, which can also be read as liberalism. And it explicitly links the dangers of the suffrage granted in the 15th Amendment with the potential danger of suffrage for women.

…it has now become a regular trick of American demagogues in power to manufacture new classes of voters to sustain them in office. It is presumed that the gratitude of the newly enfranchised will be sufficient to make them vote the ticket of their benefactors. But as gratitude is a very flimsy sort of fabric among Radicals, and soon worn threadbare, such a reliance only lasts a short time, and requires to be speedily replaced. The marvellous invention of negro suffrage (excogitated for this sole purpose) sufficed to give Radicalism a new four years’ lease of life; but the grateful allegiance of the freedmen to their pretended liberators is waxing very thin; and hence the same expedient must be repeated, in the form of creating a few millions of female votes. The designing have an active, selfish motive for pushing the measure…(Ibid, p. 328)

The hierarchical norms are so central to the worldview of Dabney that upsetting or replacing them is viewed as cataclysmic. It’s not merely annoying or something to which it’s difficult to adjust. It’s the foundation of one’s world crumbling; the pillars of truth crashing down; a tectonic shift of one’s spiritual and moral underpinnings as found in the Constitution and Scripture.

What then,in the next place, will be the effect of this fundamental change when it shall be established? The obvious answer is, that it will destroy Christianity and civilisation in America. Some who see the mischievousness of the movement express the hope that it will, even if nominally successful, be kept within narrow limits by the very force of its own absurdity. They “reckon without their host.” There is a Satanic ingenuity in these Radical measures which secures the infection of the reluctant dissentients as surely as of the hot advocates. The women now sensible and modest who heartily deprecate the whole folly, will be dragged into the vortex, with the assent of their now indignant husbands. (Ibid, p. 329)

Dabney isn’t just a history lesson. Do a quick search of his name on Twitter, and you’ll see posts like this:

A man ahead of his time.
Robert Lewis Dabney – Women's Rights Womenhttp://t.co/yjKJRWTbPn

So yes, we’ve been shown over and over who “they” are and what they want. We’ve seen that they’re unrelenting; that they won’t quit fighting, because they can’t. Reading some of the writings of Robert Dabney (his 1867 speech on the “ecclesiastical equality of Negroes” is not for the faint of heart) has made it clear to me that the folks who hold a worldview similar to his are not going to be persuaded to change their minds. This form of conservatism is profoundly resistant to change precisely because it inextricably links change with destruction; destruction of faith, destruction of country, destruction of family, destruction of self. Liberals truly are the enemy in their eyes, and only our total subservience is acceptable.

That’s never going to happen, because being a liberal means accepting and even embracing change. Being a liberal means that change is viewed as a force that can be used for the greater good; that we work to create the pressure that bends the arc of history towards justice. When we are at our best, the natural liberal tension between hierarchy and equality is lessened through new definitions of community expressed through multiculturalism, diversity, and kinship. And that, my friends, is why liberalism will ultimately prevail, despite setbacks. We can adapt; we can grow; we can change. And we never give up.