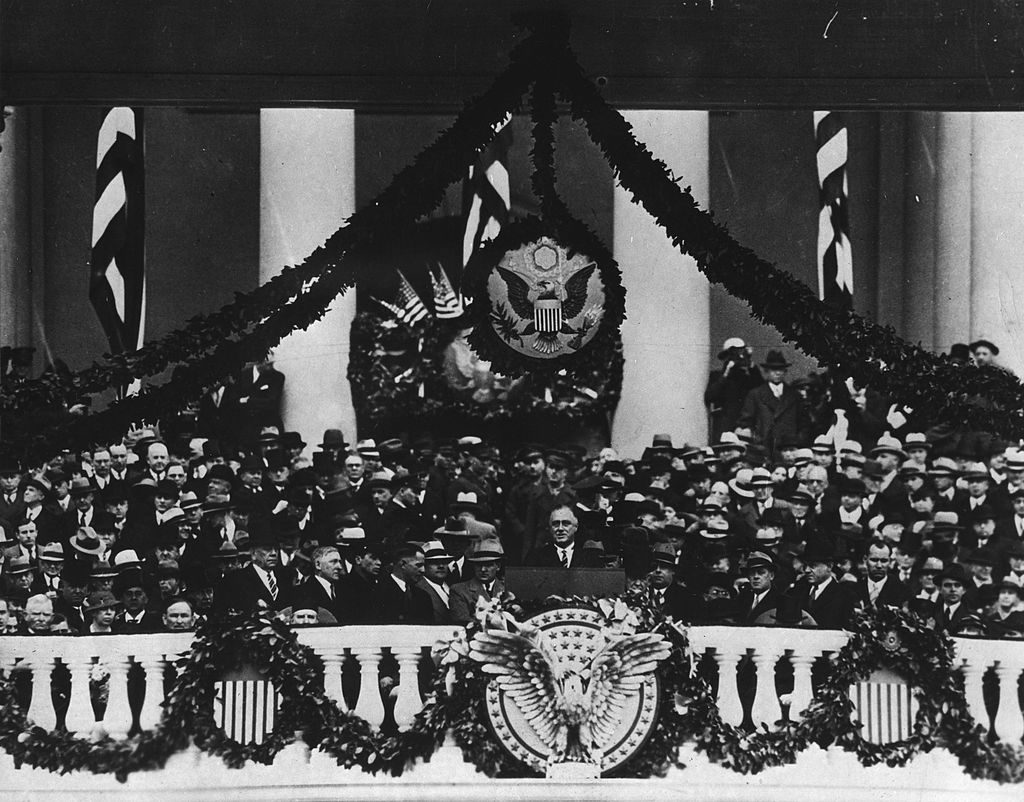 After seeing the photos of the Waffen SS VPOTUS and Senate delegation observing the specimens people in the concentration camps, I was overwhelmed, saddened, angered, and fearful. To see the casual indifference displayed by our polo-shirt-and-khaki-wearing elected white supremacists disheartened me. I knew that my planned post was going to be impossible for me to write for this week, because diving into our history of white supremacy felt like piling on rather than enlightening. Usually I can move beyond that feeling; this week, it wasn’t happening and a dose of anti-fascism medicine seemed necessary.
In January 1933, Hitler become chancellor of Germany, after rising to prominence by rallying Germans from despair to a vision of national greatness. Hitler’s vision required an enemy (non-Aryans); violence (initially the SA); and a way to spread fear (his oratorical skills and eventually a propaganda machine at his fingertips). In the United States, Roosevelt was the president-elect after winning over Herbert Hoover and was awaiting his March 1933 inauguration. Throughout the campaign in 1932, Roosevelt had promised hope to the American people, but he was well aware that “disappointed hope” could lead to destructive revolutions. He recognized that Americans had a populist streak that could easily lead to an acceptance of authoritarianism and that if faith in institutions was not restored, the path to dictatorship became easier. In preparing his inaugural address, then, Roosevelt needed to find a balance between optimism and truth-telling; between the passive confidence that things would get better and the active confidence in the values that would enable the work of making things better; and between going back to the good old days and evolving to create a good new future.

I am certain that my fellow Americans expect that on my induction into the Presidency I will address them with a candor and a decision which the present situation of our Nation impels. This is preeminently the time to speak the truth, the whole truth, frankly and boldly. Nor need we shrink from honestly facing conditions in our country today. This great Nation will endure as it has endured, will revive and will prosper. So, first of all, let me assert my firm belief that the only thing we have to fear is fear itself–nameless, unreasoning, unjustified terror which paralyzes needed efforts to convert retreat into advance. In every dark hour of our national life a leadership of frankness and vigor has met with that understanding and support of the people themselves which is essential to victory. I am convinced that you will again give that support to leadership in these critical days.

It is often assumed that the famous “only thing we have to fear is fear itself” line came towards the end of Roosevelt’s inaugural address as an exhortation to keep calm, carry on, and await a return of prosperity. From a rhetorical perspective, if it had been at then end of the speech, it would have filled that role. But by placing the the observation in the first paragraph of the speech, it serves as a warning but also as a call to endurance; a call to action; and a call to revival. It is not limited to economic terms and conditions but is a call to embrace confidence. Hoover, during the course of his presidency after the Crash, also talked about confidence, but he limited his definition toan envisioning of economic improvements. By creating a Rooseveltian definition of confidence that included attitude and action, economics and effort, Roosevelt was laying out a path and inviting Americans to walk it with him.

Happiness lies not in the mere possession of money; it lies in the joy of achievement, in the thrill of creative effort. The joy and moral stimulation of work no longer must be forgotten in the mad chase of evanescent profits. These dark days will be worth all they cost us if they teach us that our true destiny is not to be ministered unto but to minister to ourselves and to our fellow men.

Recognition of the falsity of material wealth as the standard of success goes hand in hand with the abandonment of the false belief that public office and high political position are to be valued only by the standards of pride of place and personal profit; and there must be an end to a conduct in banking and in business which too often has given to a sacred trust the likeness of callous and selfish wrongdoing. Small wonder that confidence languishes, for it thrives only on honesty, on honor, on the sacredness of obligations, on faithful protection, on unselfish performance; without them it cannot live.

Restoration calls, however, not for changes in ethics alone. This Nation asks for action, and action now.

Roosevelt spoke these words a mere 17 days after an attempt on his life in Miami, Florida that left him untouched but resulted in fatal wounds to Chicago mayor, Anton Cermak, who died 2 days after the Inauguration. The gunman had been less than 10 yards from Roosevelt, but the gunman’s wobbly perch and a last-minute jostling of his shooting arm saved Roosevelt. Before racing away from the scene, Roosevelt had the presence of mind to order that Cermak be placed in his car and rushed to the hospital. The American public hearing Roosevelt speak would have known the details of the assassination attempt and heard the added resonance and poignancy in the words, “our true destiny is not to be ministered unto but to minister to ourselves and to our fellow men.” For all of his faults, no American could doubt the sincerity of Roosevelt’s call to be a part of the greater good.

I am prepared under my constitutional duty to recommend the measures that a stricken nation in the midst of a stricken world may require. These measures, or such other measures as the Congress may build out of its experience and wisdom, I shall seek, within my constitutional authority, to bring to speedy adoption.

But in the event that the Congress shall fail to take one of these two courses, and in the event that the national emergency is still critical, I shall not evade the clear course of duty that will then confront me. I shall ask the Congress for the one remaining instrument to meet the crisis–broad Executive power to wage a war against the emergency, as great as the power that would be given to me if we were in fact invaded by a foreign foe.

To today’s reader, this section of the speech is often the most troubling; more troubling still when one realizes that this section of the inaugural address received the loudest ovation from the DC spectators. However, the context of the times provides some clarification. Congress, during a contentious lame duck session, had passed the Treasury-Post Office bill (H.R. 13520) which gave the Executive branch broad, but temporary, powers to abolish executive agencies (but not Cabinet-level departments) and required a 2/3 vote of Congress to override an executive order. During the course of the debates in the House, in the Senate, and in the press, the term “dictatorship” was thrown around with abandon and frequently as a fear-mongering tactic. Within the context of those debates and the signing of the final bill by President Hoover one day before the Inauguration, this is actually a reassurance from Roosevelt that he is not seeking the creation of a constitutional dictatorship but neither will he waver in pursuing a strong executive branch.

We have our work cut out for us. We have white nationalists leading our country; amoral opportunists who will do anything and step on anyone to achieve their goals. Reading the entirety of Roosevelt’s first Inaugural Address gives us a clue as to the path forward. Whether you consider yourself a joyful warrior, a people first-er, or someone who knows there’s a plan for all that, what’s key is knowing that we can’t let our fear define us. Or as FDR said, “We face the arduous days that lie before us in the warm courage of the national unity; with the clear consciousness of seeking old and precious moral values; with the clean satisfaction that comes from the stem performance of duty by old and young alike.”

***Roosevelt spent an evening with his speech writer, Raymond Moley, copying a draft of the speech into his own writing and making revisions as he went along. At one point, he stopped the discussion he was having with Moley and asked, “How do you spell foreclose?” It’s a small, simple, but humanizing anecdote.