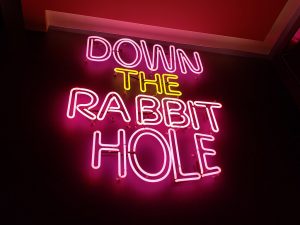 “Down the rabbit hole” sign at the Cosmopolitan of Las Vegas

Today brings another edition of my brain and how it works; going down the rabbit hole is actually one of the nicer ways of describing my thought processes. Today’s topic started with this simple paragraph in a book I’m reading about the WPA:

Then Lenson got wind of an old glassworks in Vineland, New Jersey. Vineland and Millville to the south had once formed the nexus of a glassblowing area in south-central New Jersey. The sand there was fine and free of impurities, perfect for glassmaking, but the glass factories, overtaken by modern manufacturing methods, had now closed, leaving dozens of glassblowers jobless. Lenson sought them out and told them he had a plan to put them back to work. (Taylor, Nick. American-Made: The Enduring Legacy of the WPA: When FDR Put the Nation to Work, Bantam Books, 2008, p. 276.)

As a lover of vintage glass, my first thought was that I wanted to at least see a piece of this WPA glass, a possibility I’m still researching. My next thought was that I wondered which glass factories had closed. I found one company that may have been one of those to which the book referred (the endnotes do nothing to solve the mystery), and it’s a fascinating story of hope, beauty, and tragedy.
Vineland Flint Glass Works was founded in 1897 and was a successful producer of scientific and chemical glassware. By the 1920s, the company had expanded into other areas of commercial glassware such as light bulbs and thermos liners. Victor Durand, Jr., the son of the founder, kept the business on a steady course, and Vineland Flint Glass Works was one of the most successful glass companies in the country. Despite, or maybe because of, the solid foundation provided by the commercial glass business, Durand wanted to expand production to include art glass. To that end, Durand hired Martin Bach, Jr. to lead a new art glass division. 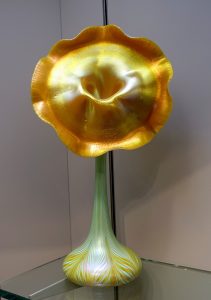 Bach was the son of a glassmaker who had worked at Tiffany before co-founding the Quezal Art Glass and Decorating Company. Today, Quezal glass is world famous (and if you haven’t seen any in person, find a way to do so; it’s beyond stunning), but the company struggled. Each piece was handpainted, a costly and time-consuming process, so it suffered in the mass marketplace. After the senior Martin Bach died, his son brought in additional investors, but it was too little, too late. Quezal closed, and after a stint at the Imperial Glass Company in Bellaire, OH (makers of Imperial Cape Cod and later Imperial Candlewick, among many others), Bach joined Durand to start Durand Art Glass and the “Fancy Shop.” Bach came to the newly-formed Durand Art Glass division with more than experience and ideas; he also recruited former Quezal glassworkers to make the 130 mile move to Vineland. Perhaps most importantly of all, Bach had the Quezal glassmaking formulas and final catalogs, which allowed Durand Art Glass to hit the ground running. Initially then, Durand glass was purely imitative of Quezal, but within a year or two of its 1924 start, the free rein given to the artisans of the Fancy Shop was leading to a blending of Quezal with elements that would come to be considered distinctly Durand. This free rein led to a wide range of shapes, styles, and forms did not lend themselves to profitability, but Victor Durand was committed to supporting the division for arts’ sake. in 1926, his vision was rewarded when Durand Art Glass was awarded a medal of honor at the Sesquicentennial International Exposition in Philadelphia. An example of a piece of Durand Art Glass with its distinctive ambergris (yellow) base can be seen here: Durand huge pulled feather iridescent art glass vase.

The art glass division might have continued for many more years under Victor Durant’s patronage and Martin Bach’s leadership. Vineland Flint Glass Works, the parent company, was in the process of negotiating a merger with Kimble Glass Company, but Durand’s committment to the art glass division was so complete that there is little doubt he would have found a way to continue its work, whether as a division in the new company or as a stand-alone maker. However, before the merger was finalized, Durand died in an automobile accident in 1931. When Kimble Glass came into being later in 1931, the the Fancy Shop wares continued to be sold but there was no new production; by the end of 1932, the shop was closed, the artisans were let go, and any glassware left was destroyed.

I’m not 100% certain that the glass artisans hired by the WPA were the Quezal/Durand workers, but it seems possible and maybe even probable. The WPA hiring of highly-skilled glassblowers should have been a feel-good happy ending for these workers. After years of not working as blowers, they now had work in their area of specialization, and they made vases, perfume bottles, bowls, pitchers, paperweights, and candle holders. WPA projects were prohibited from competing with private enterprise, so their output was given away to places like hospitals and libraries which only paid the cost of materials. Eleanor Roosevelt even bought a set of vases for the White House. What happened next varies from source to source. Some sources claim that the New Jersey glass project proved to be too expensive and was shut down in 1937. Other sources claim that Corning in New York complained, stating that if New Jersey was going to have art glass in public buildings, it should come from their Steuben division. The pressure from Corning, according to these sources, is why the project shut down in 1937. Whatever the true cause (and I suspect it was a combination of both stories), the project did shut down…and the glassblowers went back on relief.

Tonight, a post at 7pm: the next level of the rabbit hole.

3 comments for “Tuesday in Mooseville – Down the Rabbit Hole: We Don’t Make Anything Anymore 12/17/19”