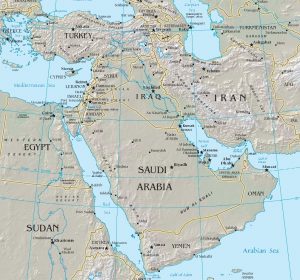 Like so many of us, I have been watching the overseas trip of this Administration with a mixture of interest and dread. As I type this (midday Monday), the trip has unfolded without any major international incidents or embarrassments, but as I read the coverage of the trip, I’ve realized that I have questions about the background of situations that go beyond the what the media is explaining.

What’s going on with Yemen and Saudi Arabia?
As with so much in the Middle East, it’s complex, but this article (The Big Problem with President Trump’s Record Arms Deal with Saudi Arabia) provides some helpful background:

Saudi Arabia, the UAE, and a coalition of predominantly Arab states launched a military intervention in Yemen in 2015 in order to drive back Houthi rebels who seized the capital and forced the recognized government to flee. Saudi officials say the campaign is also intended to combat the expanding influence of Iran, which they accuse of supporting the rebels. The Houthis, representing a Zaydi-Shiite minority concentrated in Yemen’s north, are also allied with the forces of Yemen’s former president Ali Abdullah Saleh, who was forced out following mass protests during the region-wide Arab uprisings of 2011.

Despite U.S. support of the Saudi efforts even under the Obama administration, arms sales were curtailed in 2016 due to civilian deaths in Yemen and the worsening humanitarian crisis. U.S. to halt some arms sales to Saudi, citing civilian deaths in Yemen campaign The current Administration is attempting to reverse that position, although, despite all of the publicity, the arms sale is not a done deal:

Oh, and that orb? It wasn’t quite as Lord of the Rings as it looked:

But while the Global Center for Combating Extremist Ideology may monitor extremist messaging in real time as a means to combat ISIS, Saudi ties to and funding of extremist religious schools went unmentioned. It was the Sunni/Shia split which was highlighted instead:

“Starving terrorists of their territory, their funding, and the false allure of their craven ideology, will be the basis for defeating them,” he said. “But no discussion of stamping out this threat would be complete without mentioning the government that gives terrorists all three—safe harbor, financial backing, and the social standing needed for recruitment. It is a regime that is responsible for so much instability in the region. I am speaking of course of Iran.”

Those remarks came as Iranians celebrated the re-election of Hassan Rouhani, the president who advocated opening to the West and struck a nuclear deal with Western powers. Trump also cited Iran’s role in the Syrian civil war, where it, along with Russia, supports President Bashar al-Assad; and in Yemen, where it is fighting a proxy war with Saudi Arabia for control of the Arab country. Saudi Arabia and Iran accuse each other of fomenting unrest in the region. The Obama administration’s nuclear deal was viewed by the Arab world as a giveaway to Iran because it came with massive sanctions relief in exchange for the Islamic Republic’s concessions on its nuclear program. Trump’s remarks Sunday showed that the U.S. would once again ally more openly with Sunni Arab states against the Islamic republic.  https://www.theatlantic.com/international/archive/2017/05/trump-orb/527574/

So what do these shifts in foreign policy mean? It depends who you ask (and don’t ask 45*, because he clearly doesn’t have any policies except to respond positively to anyone who strokes his ego). From the Eagle Scout whose favorite book is Atlas Shrugged, our Secretary of State:

“I think it is really important that all of us understand the difference between policy and values,” the secretary of state, a former oil executive, said as part of what he described as an “overarching view” on Trump’s “America first” mantra.

“Our values around freedom, human dignity, the way people are treated – those are our values. Those are not our policies.

Wilbur Ross, Secretary of Commerce goes a step further and just embraces the results of totalitarianism:

(I know we’re a big tent, but I’m glad this guy decided not to claim ours anymore!)

This trip is another one of those “elections have consequences” reminders; something to keep in mind when it’s time to urge people to get off their butts and vote.

And now for your daily dose of cute…

We had lots of fun watching the #tourdeyorkshire in #PateleyBridge but Mum made sure I got a nice play too 😊#deerhound pic.twitter.com/VsoWhP4pu3

What? You were expecting a Basset? (my first pup ever was a deerhound…)