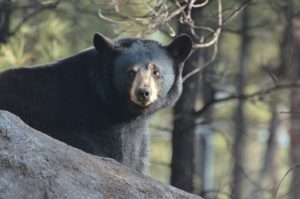 Was she a bear—or something more?

She was dreaming in the cave, with the cubs snuggled against her broad chest. They dreamed together while outside the wind swept snow pellets through the trees and the deer hunted desperately for short grasses by the half-frozen creek. Her dreams were of warmth and plenty, of her twins gamboling in the rich, juicy grasses of spring, of the taste of ripe berries in summer. She dreamed of fish in the stream and wild honey in a hive nestled in a tall tree that would present no problem at all to her climbing skills.

The Goddess slid into her dream, shaking her gently in her sleep. “Arise, O Mother! Waken and wander, for there is a cub outside who needs you. I, Goddess Artio who rules your kind, ask this of you, Mother.”

She stirred in her sleep, opened her eyes. The twins, who had gorged themselves on her milk not long ago still slept, curled up against each other. The mother lumbered to her feet and padded outside into the January twilight.

There! She heard it, the whimpering of a cub lost and hungry. Her keen ears pricked up and she padded through the undergrowth until she reached the source of the sound. Her nose picked up the scent: not bear, but human. She approached the cub, who was sitting in a pile of leaves, sobbing. Gently, she nosed him until he looked up, straight into her kind eyes.

He recognized her. “Mother! Mother, I am so cold and hungry!”

She had enough milk for this man-cub. She could feed him. Opening her mouth, she caught his outer garment in her teeth, pulling him toward her. He snuggled deep into her fur. She offered him her nipple and he began to suck.

After some time he was warmed and fed, so she picked him as she would have picked up one of the twins and carried him to the cave. He snuggled down against her and the twins, who snuffled a little in their sleep.

For a night and a day and another night she kept the man-cub with her and the twins. All were warm in the cave sheltered from the wind and the ice-cold needles of rain that blew through the woods. On the second day, when the short winter daylight was beginning to fade, her ears picked up the cries of human voices in the distance. She listened hard. She invoked Artio, Goddess of Bears. “What would you have me do, Goddess?”

“Mother, return the man-cub to where you found him, within the sound of the searchers.”

The mother once more got to her feet, picked up the man-cub by his shirt in her powerful jaws, and walked through the woods to the place where she had found him two days ago.

The voices were calling, coming nearer. “Jamie! Jamie, where are you? Jamie, answer us so we can find you!”

The mother retreated, turned, walked away. She reentered the cave and lay down with the cubs, who once more snuggled up to her in their sleep. The Goddess spoke again.

“Well done, O Mother! Thou art truly a mother, as well as my much-loved daughter. You and yours shall be safe from those who would hunt and kill you.”

The mother sighed and slipped back into her dreams. She had saved the man-cub from certain death: the rest was up to the humans.

Hours later, after Jamie was once again fed, clean, and dry, his parents, his grandparents, and his aunts clustered round him. “How did you stay alive?” they wondered aloud. “A three-year-old child, all by himself out there in the woods! And it’s January!”

The parents, the aunts, the grandfather, all laughed, not believing him. “Isn’t that sweet? A fairy story! Our little Jamie had an imaginary bear with him the whole time!”

Imaginary, my foot, Jamie’s grandmother thought. He would have died out there if he’d really been alone. The grandmother was country-born and bred, wise in the ways of woods and wildlife. She well knew the risks of exposure, especially in the winter, especially when the one exposed to the elements was a child. It had been the Goddess who saved Jamie and no one else.

It was the Goddess in the form of a She-bear, although none will believe it. All shall be well.