The Weekly Democratic Party Address delivered by Representative Joaquin Castro of Texas discussed the work House Democrats are doing #ForThePeople to counter the discriminatory and harmful policies of Republicans.

(Congressman Joaquin Castro discussed the celebration of Hispanic Heritage month and the work House Democrats are doing For The People to counter the discriminatory and harmful policies of the Trump Administration.)

The Trump Administration has violated human rights and caused suffering of thousands at our Southern Border – tearing apart families, caging children, turning away asylum seekers who came here fleeing the most unimaginable circumstances.

This is personal to me – my own grandmother came here as an immigrant, a seven year old orphan who came to Texas from Mexico. She worked as a housekeeper, maid, a babysitter, and raised my mother, Rosie, who in turn became a community organizer in Texas.[…]

As we face adversity, we are not without hope. Nothing can diminish the deep, enduring perseverance that defines us as Latinos.

I know that our Hispanic communities are a strong and proud part of this country, and I will stand with you and fight for you. 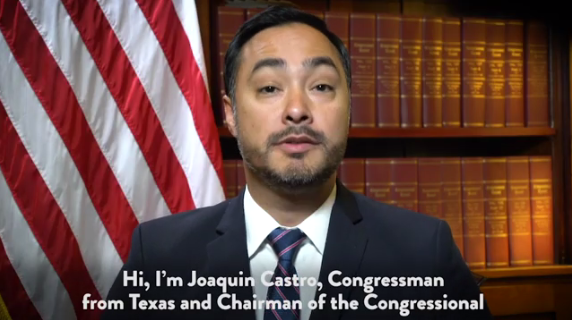 “Hello, I’m Joaquin Castro, Congressman from Texas and Chairman of the Congressional Hispanic Caucus this term.

“We have much to celebrate and reflect upon this Hispanic Heritage Month. Latinos are a part of the soul of this country – from the strength and diversity of our communities, to the history, culture and contributions of Latinos.

“We are the laborers in the fields, growing the food that feeds America.

“We are the soldiers who answered the call to serve in Vietnam and the Gulf Wars and never came home.

“We are the marchers who took to the streets and demanded the rights and dignities of workers.

“We are the educators that instill in young children the values of dignity, respect, and hard work that have defined our own communities for generations.

“We are the entrepreneurs, innovators, and leaders that make our communities prosperous and our businesses competitive.

“Every day, I see the role that Latinos play in building our country.

“Latinos come from all walks of life and different backgrounds. We come from Texas, California, Florida and Puerto Rico, the rural communities in Iowa, Minnesota, Georgia, South Carolina, and across this country.

“Some are immigrants and proud of their heritage, but no matter our diverse backgrounds, we are all proud to be a part of the American family.

“But the Latino community, in the last few years, has been something else.

“Historically, scapegoating is dangerous. During the Great Depression, over a million Mexican Americans, many of whom were already US citizens, were deported because people blamed them for taking jobs during tough economic times.

“As echoes of that era resound today, I implore all of us as Americans to not repeat the mistakes of the past.

“Mr. President: No one has to choose between the country and Hispanics.

“Hispanics are the country, just like every other American, no matter where their family came from.

“That is why I am deeply concerned about this Administration’s discriminatory policies – which have threatened the legal status of 800,000 Dreamers and hundreds of thousands of TPS recipients who know the United States as home.

“The Trump Administration has violated human rights and caused suffering of thousands at our Southern Border – tearing apart families, caging children, turning away asylum seekers who came here fleeing the most unimaginable circumstances.

“This is personal to me – my own grandmother came here as an immigrant, a seven year old orphan who came to Texas from Mexico. She worked as a housekeeper, maid, a babysitter, and raised my mother, Rosie, who in turn became a community organizer in Texas.

“As we face adversity, we are not without hope. Nothing can diminish the deep, enduring perseverance that defines us as Latinos.

“I know that our Hispanic communities are a strong and proud part of this country, and I will stand with you and fight for you.

“In Congress, we are hard at work For The People on so many issues that impact all Americans every day, from prescription drug prices to ensuring that all are counted in the 2020 Census.

“Thank you, and I hope you, your family, and all in our community have a wonderful Hispanic Heritage Month.”

Speaker of the House Nancy Pelosi did not hold her Thursday news conference this past week. There was, however, a news conference about the introduction of H.R. 3, a bill to lower prescription drug prices.

As we know, for years, seniors and families across America have struggled under the skyrocketing cost of prescription drugs. Drugs they need to stay healthy, but also the cost of drugs threatening their financial health and well‑being as well.

I’ve always said in our meetings that when you travel the country, the issue of the cost of prescription drugs is one subject that can make grown men cry, just cry about not being able to deal with those costs, what it means, again, to the health and well‑being of their families because of cost.

The burden of out‑of‑control prescription costs is an issue that touches every family in America. That was self‑evident in the election of 2018. It’s still a big issue as we go forward. We don’t want a political issue at the polls. We want a solution in the Congress, and we want it now. […] People say, ‘How come health care and that issue were so much a part of the 2018 discussion?’ Well, this is because it’s what matters to the American people.

And we had 10,000 events. There were – I shouldn’t say we had – there were 10,000 events across the country of people telling their stories about what the cost of prescription drugs was doing to their health and their financial health, but also protecting the benefit, the pre-existing condition benefit, which is legislation we have already sent over to Mitch McConnell.

So, here we are, with this legislation. And, just to review, it ends the ban – imagine that there’s a ban for the Secretary to negotiate for lower drug prices for Medicare. But, as has been indicated by our distinguished Chairmen and Members of the Leadership, that will apply to all. Makes lower drug prices negotiated by Medicare available to all Americans.

It stops drug companies from ripping off Americans while charging other countries less for the drug.

September 20, 2019
Washington, D.C. – Speaker Nancy Pelosi issued this statement in support of the climate strikes occurring around the globe:

“The voices of millions of young people are filling the streets in communities across the globe, demanding that our governments and industries work together to take decisive action to safeguard our environment and ensure a healthy, sustainable world for our children. I am especially grateful that this global movement puts indigenous rights at the forefront. I applaud and thank the bold, dissatisfied leadership of these marchers to protect our planet and our future.

“The climate crisis is the existential threat of our time, impacting every community and every nation on earth. Tackling this crisis is about protecting public health, advancing a green, forward-looking economy, defending our national security and honoring our responsibility to be good stewards of God’s creation. In my home of San Francisco, and cities and towns across America and around the world, the energy of the advocates and activists are demonstrating the power of our young people to effect lasting, transformative change to save the people and places we love.

“House Democrats stand with you in this urgent fight. Congress will build on our passage of the Climate Action Now Act, which demands action from the Trump Administration, and continue to advance innovative solutions that create jobs and protect our families.

Earlier this week, I met with young climate activists ahead of today’s #ClimateStrike. Their dedication to a clean, sustainable future for their generation & generations to come compelled the House to pass the #ClimateActionNow Act. @SenateMajLdr McConnell must take up this bill. pic.twitter.com/jns5srv5TK

Dianne Feinstein puts out a statement on climate marches: “I stand with the marchers, especially the young people demanding changes to address this emergency and to protect the world they will inherit." pic.twitter.com/zT9anOIN0e

Nine ⁦@washingtonpost⁩ reporters on multiple continents worked all day to deliver this sweeping report from the #ClimateStrike.

Kids around the world all told us the same thing: Change is coming. https://t.co/n0O3LlOtSp

‘We are living in the beginning of a mass extinction … but we can still fix this.’ — @GretaThunberg’s powerful new video explains how we can beat the climate crisis pic.twitter.com/gjfTJSlANb

2 comments for “Fighting Back: “Democrats are working for ALL the people.””